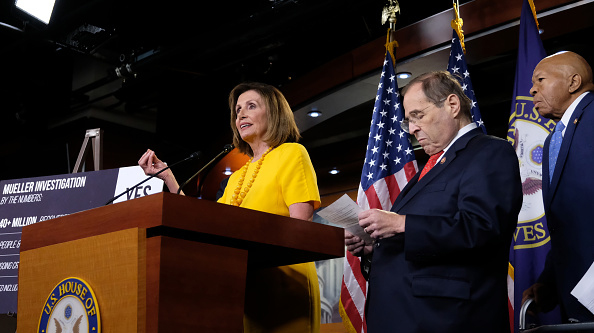 (WASHINGTON) — House Speaker Nancy Pelosi on Wednesday said her position on impeachment remained unchanged after former special counsel Robert Mueller testified about his investigation. She’s not ruling out the prospect while maintaining focus on Democrats’ ongoing investigations and legal battles with the Trump administration.”My position has always been: whatever decision we make in that regard would have to be done with our strongest possible hand, and we still have some outstanding matters in the courts. It’s about the Congress, the Constitution and the courts. And we are fighting the president in the courts,” she said at a news conference Wednesday evening. “I think if we [go] down that path, we should go in the strongest possible way.”Pelosi’s stance on impeachment was echoed by her top lieutenants and rank-and-file members after Mueller’s subdued appearance on Capitol Hill. In interviews, few Democrats expressed new interest in impeaching Trump, with some advocates giving their hearings mixed reviews.While he strongly reaffirmed his findings and defended the integrity of his investigation, the former special counsel answered many questions with one-word answers and declined to read aloud from the report — denying Democrats the made-for-television moments they had hoped would bring the report to life.”It didn’t help tremendously,” Rep. Steve Cohen, D-Tenn., a member of the Judiciary Committee. said of the hearings. “There was no grand slam, home-run hit.”In the hours following the 74-year-old Mueller’s appearance, just one Democrat, Rep. Lori Trahan of Massachusetts, announced support for an impeachment inquiry, becoming the 93rd House Democrat to do so. Roughly 4-in-10 House Democrats now back impeachment, according to an ABC News analysis.Even some of the few members able to question Mueller said his testimony did not sufficiently compel them to back impeachment.”Nothing’s changed at all,” Rep. Lou Correa, D-Calif., another member of the committee, told ABC News.Despite the initial muted response to Mueller’s testimony, discussion of impeachment percolated among Democrats on Wednesday, and came up in a closed-door caucus meeting Wednesday afternoon, according to members and aides. In response to a question about starting the impeachment process, House Judiciary Committee Chairman Jerry Nadler suggested committee chairs could begin drafting articles of impeachment against Trump, according to sources in the room.”If you’re looking for smoke signals form Speaker Pelosi, you didn’t get very many today,” Rep. Jared Huffman, D-Calif., an impeachment advocate, told ABC News. “But my sense, just as one member, is that the caucus continues to shift in the direction of impeachment.”As Pelosi urged Democrats in public and private to remain focused on their committees’ flurry of investigations into the president and the lawsuits challenging the administration’s efforts to resist congressional subpoenas, Nadler said his panel would soon head to court to obtain Mueller’s grand jury materials and seek enforcement of a subpoena for documents and testimony from former White House counsel Don McGahn.Senior Democratic officials on the House Intelligence Committee said that Mueller’s testimony provided fresh lines of inquiry for the panel’s investigation into “whether any foreign policy decisions are being motivated by compromise, or personal interest as opposed to the national interest.” The committee is also continuing to seek counterintelligence and foreign intelligence information from the Justice Department after issuing a subpoena in May.”The Mueller report — in and of itself — is insufficient evidence to walk to the Senate for a trial,” Rep. Hank Johnson, D-Ga., a member of the Judiciary Committee opposed to impeachment, told ABC News. “We can collect the evidence without declaring impeachment.”Democrats continued to note the lack of public support for impeachment and expressed concern that the effort would hurt the party’s chances of defeating Trump, taking back the Senate from Republicans and maintaining their House majority in 2020.Freshmen from moderate and conservative House districts were wary of responding to Mueller’s testimony too quickly: Rep. Anthony Brindisi, D-N.Y., a moderate freshman who cautioned his party against impeachment several months ago, said he still needed to digest Mueller’s testimony and wasn’t able to watch the full hearing.With Congress adjourning until September on Friday, Democrats will have few opportunities to persuade other colleagues to support the impeachment effort. But some argued the break would give members a chance to make the case to constituents, which could help boost public support.”There are a lot of people who plan to, you know, talk about what was in the report,” said Rep. Pramilia Jayapal, D-Wash., a member of the House Judiciary Committee. “I think it’s another opportunity to put forward the damning evidence in this report.”