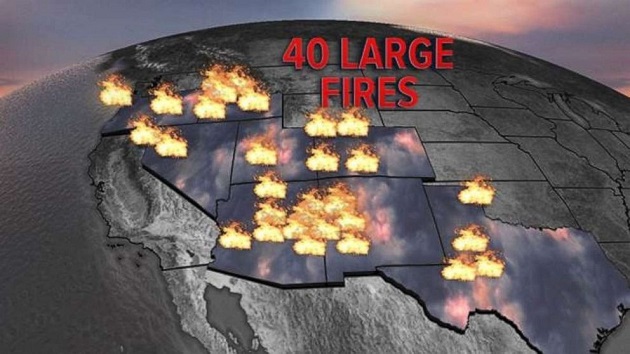 (NEW YORK) — A storm system that brought damaging winds and flash flooding has moved off the East Coast and attention turns to the West, where there is high fire danger, and the Southwest, where monsoon flash flooding possible. Evacuations and a state of emergency have been declared for the Museum Fire near Flagstaff, Arizona. There are more than 100 large fires burning in the Unites States on Wednesday morning, including 40 large fires burning in the West alone.Monsoon storms will produce dry, gusty winds and lightning for the West.The heat will increase in parts of central and southern California, where there are heat watches and warnings.Red flag warnings have been issued for Washington, Idaho and Montana.Monsoon storms will also produce localized heavy rain for the Southwest over the next several days. Some areas could see more than 2 inches of rain.Flash flooding is possible especially near the burn scar area near the Museum Fire.