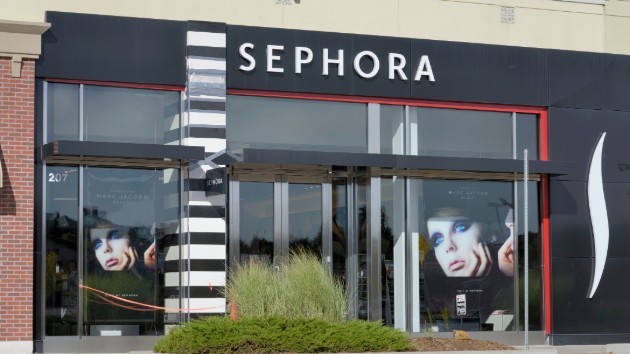 (NEW YORK) — Customers shopping in Sephora stores are now able to purchase products containing CBD in person.Sephora has made Lord Jones the first-ever CBD brand available in its stores across the U.S.The beauty chain started selling Lord Jones’ high CBD formula body lotion online last year.Both the body lotion and Lord Jones’ high CBD formula body oil are currently available in more than 170 Sephora stores across the U.S., according to Lord Jones. The brand’s royal oil will be available in stores in September.“At Sephora, we consistently strive to bring first-to-market product trends, innovation and experiences of the highest quality to our clients, and the growth of our CBD category is one such example of this,” Cindy Deily, Sephora’s vice president of skincare merchandising, told ABC News’ Good Morning America in a statement. “We have carefully curated an assortment of prestige CBD products for clients who are curious and passionate about the category and we are excited about the early success of Lord Jones , our first CBD brand to be offered in stores.”Lord Jones, founded by a husband and wife team, has been a pioneer in bringing CBD, a non-hallucinogenic marijuana plant extract, to the mainstream, specifically in the health and beauty industries.Major drugstore chains Walgreens and CVS both announced this year that they are rolling out CBD-related items in their stores across the country.With it becoming more easily available on the marketplace, here is what to know about CBD, from the health benefits to whether it’s legal to use:

What is CBD?CBD is short for cannabidiol and it’s one chemical compound found in the Cannabis sativa plant — in both marijuana and hemp. CBD differs from THC (tetrahydrocannabinol) because it doesn’t cause the intoxicating, euphoric “high” associated with marijuana.

What are the health benefits?Though there are claims of health benefits wherever you go, the science isn’t quite there yet — most of the research that has found benefits was done on animals. That’s because researching marijuana legally is difficult. Marijuana is a schedule I controlled substance, defined as having “no accepted medical use and a high potential for abuse.”Still, there’s a lot of anecdotal evidence.In June 2018, the FDA approved a CBD-containing seizure medication called Epidiolex, which can be used for the uncontrollable seizures caused by diseases such as Dravet Syndrome, a seizure disorder that can be uncontrollable with typical medications.One of the most common uses of the drug, which is in a form called Dronabinol, is FDA-approved for chemo-related nausea and vomiting. It is also used to help with appetite stimulation, especially in the cancer or AIDS population.CBD is also widely used to treat pain and anxiety. Scientists are quick to say they are still unsure of the way this works, but they believe it may be due to CBD altering some brain pathways linked to these symptoms.In skin care, CBD has been reported to treat itchiness, acne and allergic dermatitis — a skin reaction to allergies. While the mechanisms here are also unknown, scientists think it may be due to cannabinoid receptors in the skin which, when activated, work to reduce inflammation and arthritis.As states move to legalize these compounds to the public, all of these claims will need to be studied.

How do people use CBD?Many CBD products are sold as oils or balms, but they are also available in lotions, facial serums, lozenges or as part of cocktails. Although manufacturers claim there is an appropriate dose for the products they make, that is up for debate. The nutrition and supplement business, in general, is highly unregulated and this includes CBD products, even in states with legal marijuana.

What are the risks?Both the benefits and risks of CBD lack substantiated research. As with any supplement, there is always a risk for unintended drug interaction. A small number of studies on animals indicate that CBD could potentially affect cell health and the breakdown of drugs in the liver. In humans, a study that investigated CBD’s effect on seizures noted side effects including diarrhea, vomiting, fatigue and increased sleepiness.

Why is it popular now?In a word: marketing.Similar to vitamin C and kale, CBD is undergoing a rise to fame just similar to the way that kale has been labeled a “superfood,” which is a non-medical buzzword. And with celebrities publicizing anecdotal benefits, there’s been easing tension surrounding CBD’s stigma.But most importantly, as mentioned, it’s being marketed as a fix for various ailments.

Is it legal to use CBD?Not Exactly. As mentioned, marijuana is still a schedule I substance and that includes CBD.The issue of legality comes down to how the CBD is obtained. The THC portions of the cannabis plant include the flowering tops (buds), the leaves and the resin of the plant. The remainder — the stalks and sterilized seeds — is where most CBD comes from. However, producers can also obtain it from the THC portions in which case it might yield a mixture of THC and CBD.According to Katherine Pfaff, a spokesperson for the Drug Enforcement Administration, “If the product does cause THC to enter the human body and/or contains greater than 0.3 percent of THC, it is an illegal substance that may not be manufactured, sold or consumed in the United States. If, however, the product does not cause THC to enter the human body and contains less than 0.3 percent THC, it is a non-controlled substance that may lawfully be sold.”The National Institutes of Health lists over 150 studies involving CBD as a treatment for various diseases. The World Health Organization concluded in a press release that CBD is not harmful. And in the sports world, the World Anti-Doping Agency removed it from its prohibited substances list.To top this off, CBD is widely available online as well as in countless bars and coffee shops nationwide. This legal ambiguity undoubtedly confuses consumers and it won’t change until further research trickles in.The bottom line is there are countless claims regarding CBD’s ability to cure common ailments and there are also many places to buy CBD over the counter. But while there are many people willing to answer for CBD, the reality is there are still many questions that the industry itself needs to answer. Copyright © 2019, ABC Radio. All rights reserved.