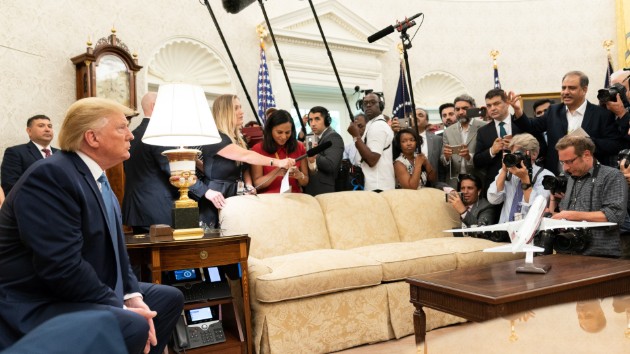 (WASHINGTON) — President Donald Trump on Monday escalated his criticism of the so-called “Squad” — four progressive congressional Democrats the president has rhetorically battled for more than a week — calling the freshmen lawmakers “a very racist group of troublemakers” as he worked to defend himself against charges that he is racist. While traveling in the presidential motorcade from the White House to the Supreme Court to pay respects to the late Justice John Paul Stevens late Monday morning, Trump fired off a tweet minutes before he and first lady Melania Trump arrived for a memorial service.After Trump returned to the White House, “The Squad” — Reps. Alexandria Ocasio-Cortez, Rashida Tlaib, Ilhan Omar and Ayanna Pressley — continued to attract the president’s wrath during an afternoon event in the Oval Office alongside the prime minister of Pakistan.“I think they’re really bad for our country. They must hate our country,” Trump told reporters as Imran Khan listened. “I think they’re very bad for our country. I think they’re very bad for the Democrat Party. I think you see that, and they’re pulling the Democrats way left.”“Nobody knows how to handle them. I feel they’re easy to handle,” Trump continued. “To me they’re easy to handle because they’re just out there. They’re very bad for our country, absolutely.”In a series of tweets earlier this month, Trump first criticized the progressive Democratic congresswomen for what he characterized as “horrible and disgusting actions,” telling them to stop criticizing the government and “go back” to where they came from.At a campaign rally in Greenville, North Carolina, last Wednesday, Trump did not intervene but just stood on stage for 13 seconds as supporters chanted, “send her back,” targeting Omar, a naturalized U.S. citizen who fled Somalia as a refugee in her youth. The president has sent mixed signals on his reaction to the chants, both saying it did not make him happy while also praising his supporters.After a Louisiana police officer suggested Ocasio-Cortez “needs a round – and I don’t mean the kind she used to serve,” AOC, as she’s known on Capitol Hill, blamed the president for the implicit threat on her life.”The Squad” has gained notoriety in Washington — and a massive following nationally — after taking office in the new Democratic majority in the House of Representatives.Tlaib, who gained national attention after she pledged to “impeach the mother——” a day after she was sworn into office, reaffirmed her commitment in remarks at the NAACP’s annual convention in Detroit.“I’m not going nowhere!” Tlaib, D-Mich., said. “Not until I impeach this president.”During his daily tweetstorm, Trump on Monday denied a weekend report The Washington Post that White House advisers had crafted new talking points and compiled new opposition research on the four congresswomen.“Now really, does that sound like me?” Trump tweeted. “It is a made up story meant to demean & belittle. The Post had no sources. The facts remain the same, that we have 4 Radical Left Congresswomen who have said very bad things about Israel & our Country!”Copyright © 2019, ABC Radio. All rights reserved.

‘Our Kind of People’: Yaya DaCosta explains why her character’s feelings of entitlement are a good thing
“The world has changed. He hasn’t” – ‘Curb Your Enthusiasm’ teaser reveals premiere date for Season 11
Issa Rae discusses married life and the possibility of having kids in ‘Self’ magazine
Treasury secretary warns of ‘calamity’ if Congress doesn’t raise debt limit
Family of missing 19-year-old Miya Marcano hoping for safe return
Following jail sentence in college cheating scandal, Lori Loughlin returning to TV’s ‘When Hope Calls’