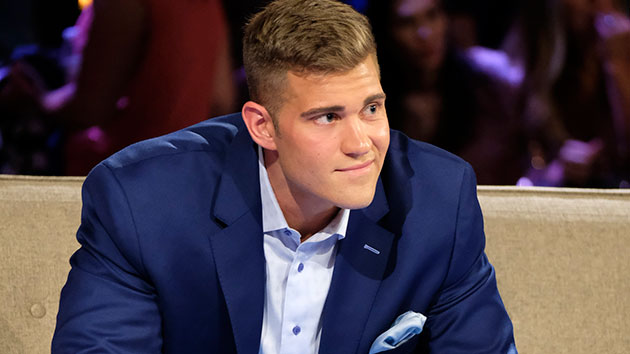 (NEW YORK) — Host Chris Harrison opened Monday night’s episode of The Bachelorette by announcing that it would be a “very different version” of “The Men Tell All” episode.

Instead of immediately bringing the guys out, as in past seasons, Harrison said the show would pick up where it left off last week — on the Grecian island of Crete, where what happened after Luke P.’s elimination was “so shocking,” it couldn’t wait another week.

Hannah, already agonizing over which of the remaining guys — Peter, Jed or Tyler C. — she’d send home at the final rose ceremony, was surprised to find Luke, whom she’d dumped last week, standing alongside them.

Hannah, if you recall, dumped Luke after he tried to get a commitment from her that she wouldn’t have sex with any of the other men, saying if she did, he was gone. Feeling like she was being “sex-shamed,” Hannah told Luke she had, in fact, had sex with other men.  The episode ended with Luke being driven off a van and out of Hannah’s life for good — or so she thought.

Luke is sure he can convince Hannah to change her mind — so sure, that he has an engagement ring in his pocket.

“This is my heart we’re talking about here,” he argues, before Hannah interrupts him with, “This is not about your heart,” adding that he’s “narcissistic.”

Luke insists he knows Hannah is still in love with him, regardless of what she says.  But Hannah stands firm, saying she has “no regrets” about her decision.

When Harrison finally steps in and asks, “So Hannah, what do you want?,” her answer is, “I don’t want him to be here.”

“Can you look me in the eye and tell me you have clarity and that you have no feelings for me any longer, asks Luke one more time.

“Yes, I can,” Hannah declares.

And with that, Luke is finally satisfied and leaves voluntarily. Afterwards, Harrison tells a stunned Hannah about the engagement ring, and Luke’s intent to propose to her.

How will Hannah’s journey end? We’ll find out the answer in the two-night season finale of The Bachelorette, next Monday and Tuesday at 8 p.m. ET on ABC.