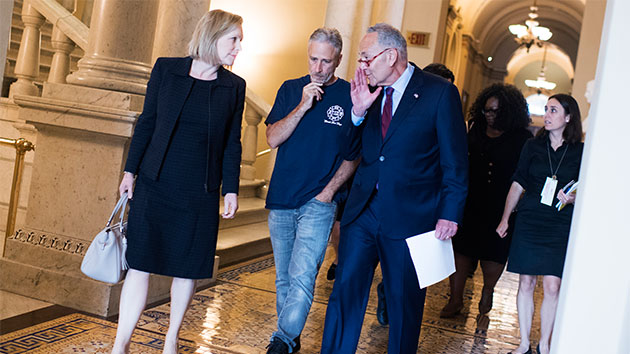 (WASHINGTON) —  In a show of major bipartisan agreement, the Senate on Tuesday passed a bill making the 9/11 victims compensation fund permanent by a vote of 97-2 as first responders and comedian Jon Stewart looked on from the Senate Gallery.

Stewart and others started a standing ovation as the vote passed the threshold and several senators, including New York Democrat Sen. Kristen Gillibrand, who had helped lead the effort, joined the applause.

The House passed the bill on July 12 by a vote of 402-12. It now heads to President Donald Trump’s desk. Because more than two-thirds of the Senate and House supported the bill, Congress could override a veto if Trump objected, but he is expected to sign it.

The fund was created to provide compensation to anyone who suffered physical harm or was killed as a result of the terrorist-related aircraft crashes or the debris removal efforts that took place in the immediate aftermath of those crashes. Before today’s vote, the bill was set to run out of money in December 2020.

Stewart has been a major proponent of making the fund permanent. His celebrity shone a spotlight on the issue, and his testimony on Capitol Hill ripped lawmakers for failing to fully fund the program.

“They responded in five seconds,” Stewart shouted at a hearing on June 11. “They did their jobs. With courage grace, tenacity, humility. Eighteen years later, do yours!”

Even as Stewart worked toward an expeditious solution, some 9/11 victims were not able to see the fruits of his labor. NYPD Detective Luis Alvarez passed away from cancer just weeks before the bill was passed.

Alvarez had given his badge to Senate Majority Leader Mitch McConnell, a sign of the promise McConnell made to the ailing detective to bring the legislation to the Senate floor for a vote without any political jockeying over the budget.

Last week, GOP Sen. Rand Paul of Kentucky opposed passing the bill by unanimous consent, with concerns about how to pay for the fund. Republican Sen. Mike Lee of Utah also introduced an amendment to increase oversight on the fund. Both amendments failed to pass in a Senate vote on Tuesday. Both Paul and Lee voted against the final bill.

Senate Minority Leader Chuck Schumer had pushed for an agreement, and last Thursday expressed confidence the bill would pass, calling the moment the end of “that dark tunnel we have been in for over a decade.”