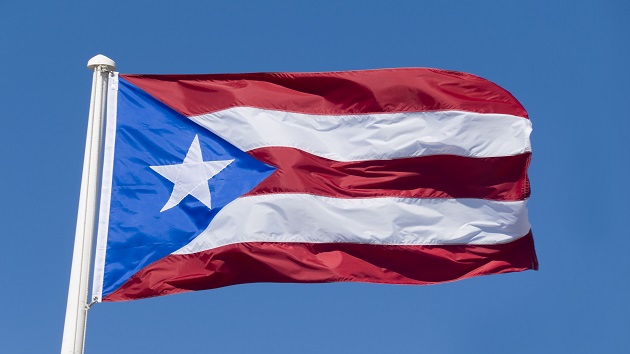 (NEW YORK) — After a day of largely peaceful demonstrations, masses of protesters were met with tear gas in San Juan late Monday as they called for the ousting of embattled Gov. Ricardo Rossello. Protesters were seen throwing objects at police keeping the line between the governor’s mansion and those calling for Rossello to resign. The gas was deployed after multiple warnings by police to leave the area at 11 p.m. A Puerto Rico police spokesperson, however, told ABC News an 11 p.m. curfew does not exist.”There is no schedule for the demonstrations; last Wednesday and Friday the protesters were until after 1 a.m. at the entrance of Calle Fortaleza,” the spokesperson said. “The mobilization of the police to evict the area is carried out according to the aggression acts that the protesters carry out against the security agents. The eviction process depends on the protesters and their conduct within the framework of the Law.”It was the third time tear gas has been used against protesters since the start of demonstrations earlier this month.The dark turn late Monday was in stark contrast to a day of mostly celebratory protests against Rossello.Blowing whistles, waving red, white and blue Puerto Rican flags and demanding the immediate resignation of the governor, tens of thousands of protesters Monday morning showed their outrage by shutting down a major freeway in the U.S. territory’s capital and imploring those who feel the same to join an island-wide strike.Some protesters spent the night at a baseball stadium in the capital of San Juan and were joined at daylight by a crowd that grew through the morning, fueled by anger that Rossello has defiantly refused to step down.”That’s not enough. We need him out. We need a good governor. We need leadership,” protester Daphne Lebron told ABC News.Another protester, Angel Torres, told ABC News that demonstrators are fed up with Rossello and his inner circle.”How can someone who belittles his own country represent us?” said Torres, who was born and raised on the Caribbean island.”Gov. Rosello did a great job … uniting us,” Torres said facetiously.Rossello appeared on Fox News on Monday afternoon and was pressed by the host to name one supporter. The governor named the mayor of San Sebastian, Javier Jimenez Perez, who later told ABC News that he does not support the governor.Protesters seize freewayBy 10 a.m. Monday, the crowd had swelled to tens of thousands of protesters who began marching en masse from the Hiram Bithorn Stadium south of the San Juan business district to a major freeway nearby, where they stopped traffic — an attempt to cripple business in the downtown area.The island’s tourism industry continued to take a hit as Royal Caribbean International announced it was canceling port calls of its Celebrity Equinox and MSC Seaside cruise ship to San Juan, saying in a statement to ABC News that “concern for the safety and well-being of our guests and crew members is our top priority.”Since turmoil erupted in Puerto Rico, Royal Caribbean has scrapped port calls to San Juan. The Puerto Rico Tourism Co. said in a statement that each canceled port call is costing the island’s economy $311,000 to $439,000.Organizers heralded the demonstration as the “Marcha del Pueblo,” or “The People’s March,” and called on all Puerto Rican citizens to go on an island-wide strike until the governor steps down.Demonstrations are also expected to spread to New York City, where protesters are planning to gather in Columbus Circle in Manhattan on Monday afternoon to join the calls for Rossello’s resignation.The governor, a Democrat, has faced mounting pressure to resign since private online chat messages on The Telegram app were leaked earlier this month.Rossello, 40, the second youngest governor in Puerto Rican history and the son of former Gov. Pedro Rossello, was sworn in as governor of the U.S. territory on Jan. 2, 2017, amid turmoil over a debt crisis and 13 straight years of recession.Just eight months after his election, Hurricane Maria hit the island and caused widespread death and destruction, sending Puerto Rico deeper into financial turmoil.‘We will stand up’Protester Kevin Morales said he found it “infuriating” to read the nearly 900 pages of text messages obtained and posted on July 13 by the Puerto Rico Center for Investigative Journalism. He said he and other Puerto Ricans have long been fuming over government corruption even before the text messages were made public.On July 10, Rossello’s administration was plunged into a scandal when the Federal Bureau of Investigation (FBI) arrested the governor’s former Education Secretary Julia Keleher and the former head of Puerto Rico’s Health Insurance Administration Angela Avila Marrero on charges of steering federal money to unqualified, politically-connected contractors.Standing on the freeway amidst a sea of protesters as far as the eye could see, Morales, who is planning to go to college in Oxford, England, in the fall, said he was proud and inspired to see so many Puerto Ricans, particularly other young people, speaking out to demand better leadership.”The people of Puerto Rico will not be defeated,” Morales told ABC News. “We will stand up. We will take what is ours — our island.”He added that he plans to keep protesting as long as Rossello remains in office.”If he resigns, we will end the protest,” Morales said.

COVID-19 live updates: FDA approval for kids’ vaccines may take longer, source says
‘Archer’ renewed for season 13
‘Our Kind of People’: Yaya DaCosta explains why her character’s feelings of entitlement are a good thing
“The world has changed. He hasn’t” – ‘Curb Your Enthusiasm’ teaser reveals premiere date for Season 11
Issa Rae discusses married life and the possibility of having kids in ‘Self’ magazine
Treasury secretary warns of ‘calamity’ if Congress doesn’t raise debt limit