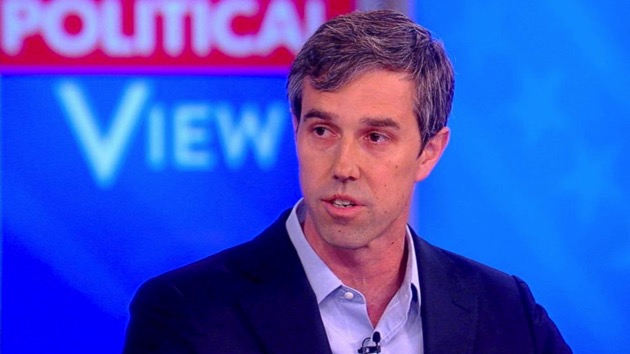 (NEW YORK) — 2020 candidate Beto O’Rourke in a heated discussion with The View cohost, Meghan McCain, doubled down on his comments to ABC News describing President Donald Trump’s North Carolina rally “an impromptu Nuremberg” gathering.“When he’s asking four women of color to go back to their own country, and then connecting that with everything else that he’s doing, calling the press the enemy of the people, there is only one path that will take us down,” O’Rourke said.He disagreed with McCain, who said his comments – which referenced the types of xenophobic rallies that took place during the rise of the Nazis to power in Germany– may turn off moderate voters, and called his comments extreme.“We all have to take accountability for our actions,” O’Rourke said, adding later “The direction of this country has never been so imperiled or undermined as it is now. This is our defining moment of truth.”On Monday, during an interview with ABC News Live, the former Texas congressman condemned everything from the president’s immigration policies to his comments against four congresswomen of color, also known as “the Squad.”“What we saw in North Carolina last week was almost an impromptu Nuremberg rally, inciting hatred and ultimately, implicit violence against people of color, people. Based on their religion and based on their difference from the majority. And it is in keeping with the president who describes Mexican immigrants as rapists and criminals, who describes asylum seekers as animals and an infestation. The man who calls Klansman very fine people. It very clear the path he is taking us on.”

"Yes, President Trump is a racist," 2020 candidate Beto O'Rourke tells ABC News' @BrianaKStewart on @ABCNewsLive. "What we saw in North Carolina last week was almost an impromptu Nuremberg rally … it's very clear the path that he is taking us on" https://t.co/YqQFDBlZbr pic.twitter.com/WpSAAyAHup

O’Rourke and his wife Amy appeared in their first national television interview at The View Tuesday morning, discussing immigration, life in El Paso, and the campaign trail ahead.Amy O’Rourke has been an increasing presence on the campaign trail, introducing herself to voters in Iowa, New Hampshire, and most recently, New York.The couple trekked to Ellis Island – which in its day processed more than 12 million immigrants – and as a result, over 100 million Americans: more than 30 percent of the population.The trip was a chance to trace his and the country’s roots to the border battle in his hometown in Texas. It was also a chance for the presidential candidate to dig deeper on one of his signature issues — immigration — on the heels of the June debate in Miami where his fellow 2020 hopeful former Housing Secretary Julian Castro said O’Rourke should “do his homework” on the issue.It also comes on the heels of O’Rourke’s continued stagnation in the polls, as he attempts to “reboot” a campaign that started hot, but in recent months has slid.Tuesday’s was O’Rourke’s second appearance on The View – the first, where the ladies came down on him hard for his campaign rollout in Vanity Fair, and perceived White Male Privilege – that he was ‘born to run,’ born for the role of president he had yet to convince the nation he deserved. In his first View appearance he also walked back comments he made in his announcement video in March – where he joked that Amy bore the brunt of the childcare, and that he “sometimes helps out” with their three kids – comments which drew wide backlash.Copyright © 2019, ABC Radio. All rights reserved.