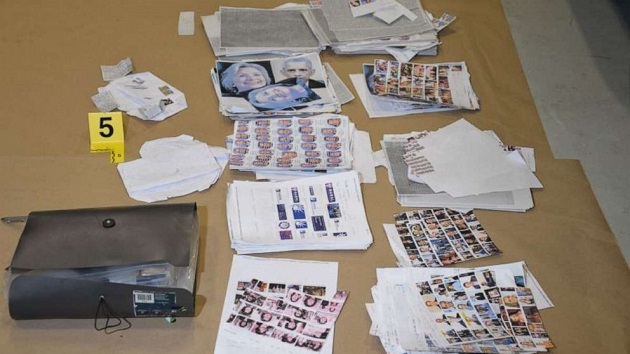 (NEW YORK) — New defense filings in the case of admitted serial bomber Cesar Sayoc paint a grim picture of a man who “lost everything in the Great Recession,” had “cognitive limitations and severe learning disabilities” and was “abandoned by his father and sexually abused by a teacher at his Catholic school.””In this darkness,” his defense counsel wrote, “Mr. Sayoc found light in Donald J. Trump.”In their sentencing submission Monday, Sayoc’s lawyers lay out the path from his difficult childhood through his recent years living out of his cramped van, festooned with stickers supporting Trump, and critical of the president’s perceived enemies.”As he grew older and more isolated, excessive steroid use increased his feelings of anxiety and paranoia,” his lawyers wrote.”Mr. Sayoc came to believe that prominent Democrats were actively working to hurt him, other Trump supporters, and the country as a whole,” the defense filing states.Sayoc would eventually construct and send through the mail 16 improvised explosive devices that his lawyers say in his mind were hoax devices to “try to intimidate and scare Trump’s perceived enemies.”In March, he pleaded guilty to 65 counts in Manhattan federal court stemming from mailing the devices.His attorneys asked that Sayoc be sentenced to just over 10 years. Sentencing is scheduled for Aug. 5.The defense filing draws a thread through Sayoc’s “religious” viewing of Fox News programs like Fox and Friends and Hannity, to his following of Trump supporters on social media and his connection to hundreds of right-wing Facebook groups, many of which “promoted various conspiracy theories, and more generally, the idea that Trump’s critics were dangerous, unpatriotic, and evil.”Sayoc was an avid follower of Trump’s Twitter account and his federal public defenders point to Trump throughout the filing.”In his statements, Trump specifically blamed many of the individuals whom Mr. Sayoc ultimately targeted with his packages,” they write.But prosecutors have countered the blaming of Trump and claims of dud devices. The government’s sentencing memo calls for a sentence of life in prison for sending the 16 improvised explosive devices to 13 victims around the country.Prosecutors say Sayoc “perpetrated this attack intending to injure and silence public servants and private citizens based on their civic activities, and to intimidate like-minded people from entering the public arena and participating in discourse that is critical to the proper functioning of this country.”Prosecutors called Soyoc’s claim that his devices were hoaxes a “desperate effort to avoid accountability” and “simply false.”Though they acknowledge that the “IEDs would not have functioned as designed,” prosecutors say, as a legal matter, that the devices meet the requirement that the “bomb be capable of exploding and intended to be used as a weapon.””Deficient as the defendant may be as a bomb maker, hoaxes do not involve real explosives, real shards of glass, and real toxic chemicals, as the defendant’s IEDs did,” prosecutors wrote.According to FBI analysis included in the filings, the devices were packed with “explosive powder from fireworks” and “pool shock,” or chemicals that contained chlorine commonly used in swimming pools that would “increase the chances of burning victims.”Sayoc was charged last October for the string of package bombs that were mailed to prominent Democratic politicians and media figures, including Barack Obama, Hillary Clinton and current presidential candidates Cory Booker, Kamala Harris and Joe Biden. The packages triggered a nationwide manhunt involving hundreds of investigators.The defense and government filings are filled with color photographs of each of Sayoc’s explosive devices, the interior and exterior of his van, security camera stills, internet search terms he used and quotes from his social media posts. Also included are pictures of social media posts, childhood photos of Sayoc and his writings. Copyright © 2019, ABC Radio. All rights reserved.

US enters deferred prosecution agreement with detained Huawei executive Weng Manzhou
Harris interview with ‘The View’ delayed after co-hosts test positive for COVID-19
Gabourey Sidibe shares the special connection she has to her new podcast thriller ‘If I Go Missing the Witches Did It’
Tony nominee Katori Hall shares what she’ll do with her award if she wins on Sunday night
Jan. 6 select committee sends first subpoenas to former Trump aides, advisers
Billy Bob Thornton and Tania Raymonde on bringing ‘Goliath’ to a close with new fourth season