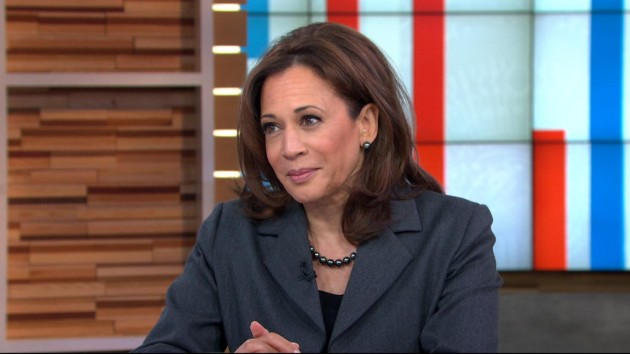 (WASHINGTON) — Presidential candidate Sen. Kamala Harris is teaming up with House Judiciary Chair Jerry Nadler, D-N.Y., on a comprehensive marijuana reform bill that would decriminalize marijuana at the federal level, expunge prior marijuana-based convictions and fight against discrimination for those who possess or use it.”Times have changed — marijuana should not be a crime,” said Harris, D-Calif. “We need to start regulating marijuana, and expunge marijuana convictions from the records of millions of Americans so they can get on with their lives.”The Marijuana Opportunity Reinvestment and Expungement Act announced Tuesday morning would remove marijuana from the Controlled Substances Act, thereby decriminalizing marijuana for previous and pending convictions. States could then set their own marijuana policies, similar to what’s currently in place for alcohol.The bill would also require resentencing for prior marijuana-based convictions.The policy is a 180-degree turn from Harris’ past positions on marijuana. When Harris was California’s attorney general from 2011 to 2017, tens of thousands of Californians were arrested yearly for marijuana infractions, according to a 2016 Drug Policy Alliance report.For months, she’s also expressed being in favor of legalizing marijuana: a position she laughed at just five years ago when asked about it during a local TV interview in Sacramento, California.

While she’s yet to propose legalizing marijuana, she said in an interview with The Breakfast Club in February she would do so as president.”There are a lot of reasons why we need to legalize,” Harris started saying, before being asked if she had ever smoked weed herself.”Yes,” she said. “It was a long time ago.””Listen, I think it gives a lot of people joy, and we need more joy,” she added, to laughs.Harris and Nadler’s bill would also put in place discrimination protections, including prohibiting landlords from denying federal housing related to tenant marijuana use or possession, and prevent immigration authorities from being able to use marijuana possession/use to target people.The bill would also authorize Congress to use half of the yearly tax revenue from the marijuana industry to reinvest in communities impacted by the war on drugs, small businesses in the marijuana industry controlled by low-income individuals and make marijuana licensing easier for those negatively affected by marijuana criminalization.”As marijuana becomes legal across the country, we must make sure everyone — especially communities of color that have been disproportionately impacted by the war on drugs — has a real opportunity to participate in this growing industry,” Harris said.With Nadler on her side, a Harris aide said the bill is expected to be taken up for a vote. Copyright © 2019, ABC Radio. All rights reserved.