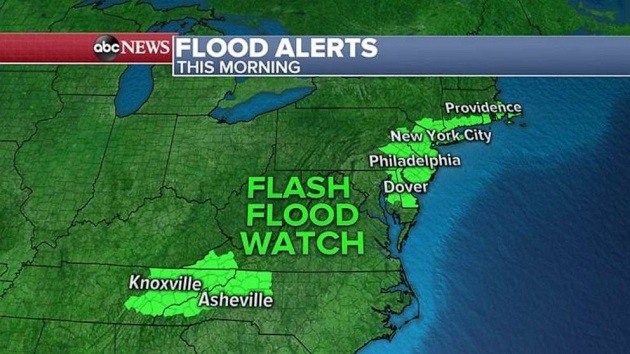 (NEW YORK) — Severe storms moved through the Northeast late Monday and into Tuesday morning, producing damaging winds of 75 to 80 mph from Virginia to New Jersey. Heavy rain came with these storms, including up to 4 inches in Westchester County, just north of New York City, in only a few hours. Flash flooding was reported from Pennsylvania to Connecticut. There was a total of 480,000 people without power from Wisconsin to New York at 5 a.m. Tuesday.Flood alerts remain in effect for 12 states from Tennessee to Massachusetts on Tuesday.Severe storm threat shifts south Tuesday into the Carolinas and southern Virginia from Myrtle Beach, South Carolina to Norfolk, Virginia.The biggest threat with these storms will be damaging winds, heavy rain and frequent lightning.Tropical depression No. 3 is lingering off Florida’s east coast on Tuesday, but most of the heavy rain is offshore.The tropical cyclone will move north, parallel the Southeast coast, throughout the day Tuesday and could bring heavy rain — up to 3 inches — to the Carolinas.The National Hurricane Center is not forecasting this cyclone to strengthen and get a name.It is expected to weaken and die out sometime on Wednesday.

Britney Spears makes triumphant return to Instagram, but some fans think someone else is running the account
Biden to focus on ‘intensive diplomacy’ at UN amid tensions with allies
Republicans dig in on debt-limit standoff despite Democratic effort to mount pressure
“Ugh! Don’t do that!” ‘Sopranos’ creator David Chase on how his crew hated series finale set to “Don’t Stop Believin'”
Could Jason Sudeikis return to ‘SNL’ as the first host of the new season?
500 US women athletes ask Supreme Court to uphold abortion rights