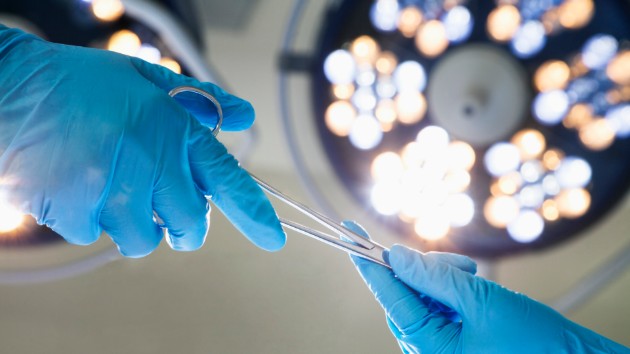 (HACKENSACK, N.J.) — The fiancee of a New Jersey principal who died after donating bone marrow to a teenager filed a lawsuit against the hospital on Monday, accusing it of negligence and wrongful death.Westfield High School Principal Derrick Nelson, 44, died at Hackensack University Medical Center in April after donating bone marrow to an anonymous cancer patient in France. Nelson, a father of one, lapsed into a coma during the procedure and died several weeks later. His fiancee, Sheronda Braker, accused the hospital and an anesthesiologist there of negligence in her suit on Monday, claiming they failed to deliver Nelson an adequate supply of oxygen.”At the time of the procedure, Dr. Nelson was known to have sleep apnea and was overweight: two factors which made him a higher risk for undergoing anesthesia,” the lawsuit said. “At the time anesthesia was induced, Dr. Nelson only had an oxygen saturation of 91.””Despite Dr. Nelson having such a low oxygen saturation, defendants proceeded with the administration of anesthesia and also failed to supply additional oxygen to him,” it added.Braker’s attorney, David Mazie, said Nelson died while committing a “selfless act” after signing up with the Be the Match bone marrow registry network.”Dr. Nelson was one of a kind. Many people talk about donating their time to charity and helping others, Dr. Nelson’s entire existence was living this way,” Mazie said during a press conference Monday. “He learned about a 14-year-old suffering with cancer in France and in a matter of weeks decided he was going to donate bone marrow and help that child he had never met. Tragically, it was that final selfless act that took Dr. Nelson’s life.”Nelson served as an officer in the U.S. Army Reserve for more than 20 years and New Jersey Gov. Phil Murphy ordered that all flags be flown at half-mast on the day of the funeral.The hospital did not immediately respond to ABC News’ request for comment on Monday.Copyright © 2019, ABC Radio. All rights reserved.

Harris interview with ‘The View’ delayed after co-hosts test positive for COVID-19
A century after arson decimated its Chinatown, San Jose to apologize for past racism and injustices
After people spoke out about COVID-19 vaccines and period changes, research is underway
Willie Garson died from pancreatic cancer, his obituary reveals
More than a year after George Floyd’s killing, Congress can’t agree on police reform
Boppy newborn lounger pillows recalled after eight infant deaths