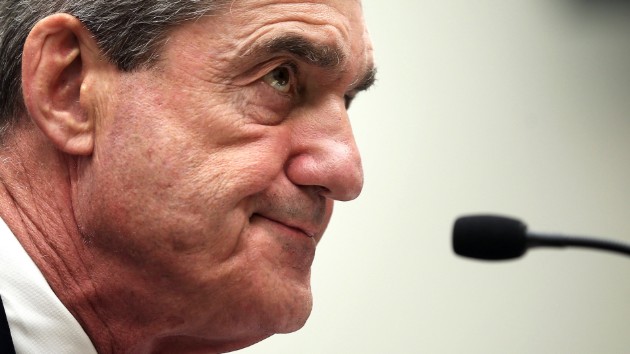 (WASHINGTON) — Facing pointed questions about a hot-button government investigation in June 2013, then-FBI Director Robert Mueller didn’t budge. “I’m not going to speculate,” he flatly told Rep. Jim Jordan, R-Ohio, when pressed on the details of a probe into an Internal Revenue Service targeting scandal. On Wednesday, Mueller will return to Capitol Hill to face questions about his investigation into Russian efforts to interfere in the 2016 presidential election. Lawmakers and aides, including many with experience questioning Mueller, don’t expect him to be any more forthcoming.”He is a reticent witness even under the best of circumstances,” House Intelligence Committee Chairman Adam Schiff, D-Calif., said at the Aspen Security Forum, held in Colorado last week. “[Mueller] never gives a 10-word answer when a one word answer will do,” one senior Democratic aide said. “He does not volunteer information.” While they may downplay Mueller’s expected testimony, for months Democrats have depicted the former special counsel as the star witness of their investigations into President Donald Trump’s actions. As the Trump administration has resisted their subpoenas for documents and witness testimony, Mueller — they have said — could help “tell the story” of the 448-page report that most Americans haven’t read. “We hope it won’t end up being a dud,” House Judiciary Committee Chairman Jerry Nadler said Sunday on Fox News. “We’re going to ask specific questions about — ‘look at page 344 paragraph 2, please read it. Does that describe obstruction of justice, and did you — did you find that the president did that?’ for example.”Mueller is set to testify for three hours before the House Judiciary Committee and two hours before the House Intelligence Committee in back-to-back sessions. The first hearing will focus on Volume II, the potential episodes of obstruction of justice investigated by the special counsel. The second hearing will focus on Russia’s interference in the 2016 election. Mueller’s investigation found no evidence of collusion between the Trump campaign and Russia, but did not determine whether Trump obstructed justice, nor did the report “exonerate” the president. Breaking his silence about the 22-month investigation in May, Mueller attempted to set expectations for any appearances on Capitol Hill, as lawmakers wrangled with his team behind the scenes to secure his testimony. “The report is my testimony,” Mueller said. “I would not provide information beyond that which is already public in any appearance before Congress.”Some Democrats believe that even with his reticence to testify beyond the nature of his report, Mueller’s words could help them distill the significance of Trump’s actions. “Russia attacked, Trump welcomed it, and Trump covered it up,” Rep. Eric Swalwell, D-Calif., a member of the House Intelligence and Judiciary Committees, told ABC News. “If this comes across as a ‘Law and Order’ episode, rather than giving people a Ph.D. in Russian studies, that is a success.” The hearing could also be a defining moment in the intraparty impeachment debate. While more than 90 House Democrats now support launching impeachment proceedings against Trump, many Democrats — including moderate members of the freshman class — have said they’d wait to hear from Mueller before weighing in on impeachment. “Mr. Mueller would be, would be part of that beginning to let the American people hear directly from witnesses about the conduct of the president and at the end of that make a judgment as to whether or not we ought to file articles of impeachment,” Rep. David Cicilline, D-R.I., said on ABC News’ podcast “The Investigation.” Republicans to elevate concerns about Russia probe, Trump’s innocence Republicans, including some of the president’s closest allies, plan to use Mueller’s appearance to highlight the fact that Mueller’s team found no evidence of a conspiracy between the Trump campaign and the Kremlin to influence the election. “What we’re expecting is another round of what we already know,” said Rep. Doug Collins, R-Ga., the top Republican on the House Judiciary Committee, on Fox News. “It’s like going back and finding a book on the shelf that looks new, and then all of a sudden you begin to read it and you find out, wait, I already read this before.”Republicans could also use the platform to elevate their concerns that Trump was inappropriately targeted by the FBI and the Justice Department. “We have to do more than just question Robert Mueller,” Rep. Matt Gaetz, R-Fla., a committee member and often fervent Trump supporter, told Fox News on Monday. “We have to expose the bias investigation that was run and we also have to expose the substantial omissions in the Mueller report.” They have repeatedly cited texts between former FBI agent Peter Strzok and former lawyer Lisa Page — who exchanged messages as they were having an extramarital affair — as evidence that the origins of the investigation and decision-making by the FBI in the 2016 election was politically tainted.The Justice Department inspector general concluded that the FBI’s actions in 2016 were not politically-motivated, but that Page and Strzok’s actions, among others, damaged the FBI’s reputation. Trump and Republicans, including members of the House Intelligence Committee, could raise questions about the FBI’s use of the Steele dossier — a series of uncorroborated allegations against Trump prepared by a former British intelligence official — in their efforts to obtain a warrant to surveil former Trump campaign aide Carter Page. Republicans say the warrant was improperly obtained, while former Justice Department officials have defended their actions.