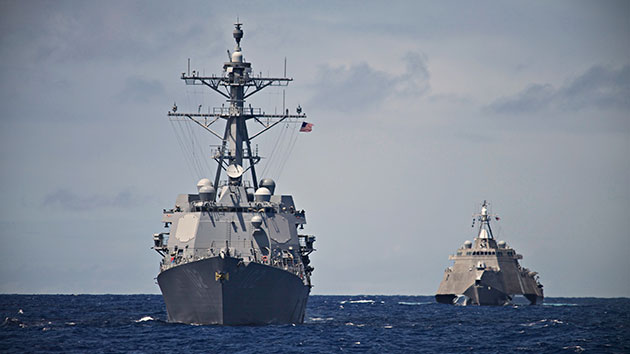 Following reports of the missing sailor last Wednesday, the Abraham Lincoln, along with the cruiser USS Leyte Gulf and a Spanish frigate, began conducting search and rescue operations which concluded on Friday.

Saldana’s fiancé told the Ohio Times that the sailor’s belongings had been found on the side of a ship catwalk early Wednesday morning.

“Our thoughts and prayers are with the family, friends and shipmates of our lost Sailor,” Vice Adm. Jim Malloy, commander, U.S. Naval Forces Central Command, U.S. 5th Fleet, and Combined Maritime Forces said in a statement. “During this tragic time, I want to thank the Spanish Álvaro de Bazán-class frigate Méndez Núñez for their assistance in the search operations, and all the Sailors involved in the search for their valiant efforts to find our shipmate.”

The Abraham Lincoln became the most-watched aircraft carrier in the world after it was rushed to the Middle East in early May in response to U.S. intelligence that indicated Iran and its proxies were planning an attack on U.S. forces in the region.

ABC News was among the first group of media outlets permitted aboard the carrier when it arrived in the Middle East. At the time, U.S. officials said the Abraham Lincoln’s deployment had deterred Tehran from direct attacks against American interests.

But less than two weeks later, the U.S. blamed Iran for shooting down an American drone over the Strait of Hormuz. And last week, Marines on board the amphibious warship USS Boxer destroyed an Iranian drone in the strait that was “threatening the safety of the ship and the ship’s crew.Copyright © 2019, ABC Radio. All rights reserved.