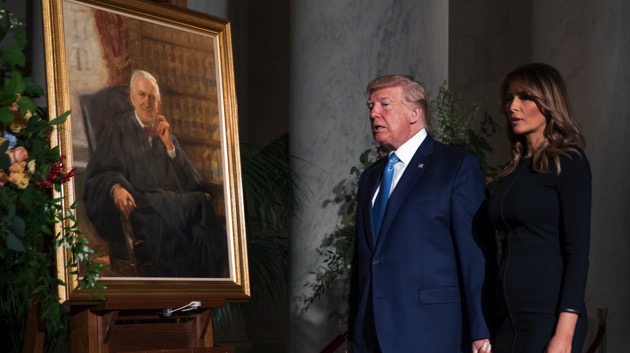 (WASHINGTON) — President Donald Trump and first lady Melania Trump on Monday paid their respects to the late Justice John Paul Stevens who died last week at the age of 99.They paused before the flag-draped casket, bowing their heads, and then stopped to view a portrait of Stevens nearby.Despite being put on the bench by Republican President Gerald Ford, Stevens became a hero to liberals when he voted to limit the use of the death penalty, uphold affirmative action, broaden the core holding of Roe v. Wade on abortion rights and argued for strict separation of church and state.After his retirement in 2010, after serving on the Supreme Court for 35 years, he became extremely vocal on political issues, even being critical of President Trump.“The president is exercising powers that do not really belong to him. I mean, he has to comply with subpoenas and things like that,” Stevens told the Wall Street Journal in May.When Justice Stevens penned an op-ed in the New York Times calling for the repeal of the Second Amendment Act, he received backlash from Trump on Twitter.

THE SECOND AMENDMENT WILL NEVER BE REPEALED! As much as Democrats would like to see this happen, and despite the words yesterday of former Supreme Court Justice Stevens, NO WAY. We need more Republicans in 2018 and must ALWAYS hold the Supreme Court!

“THE SECOND AMENDMENT WILL NEVER BE REPEALED!” Trump tweeted in all capital letters. “As much as Democrats would like to see this happen, and despite the words yesterday of former Supreme Court Justice Stevens.”Justice Stevens was lying in repose in the Supreme Court’s Great Hall. He is survived by his children, Elizabeth Jane Sesemann and Susan Roberta Mullen, nine grandchildren: Kathryn, Christine, Edward, Susan, Lauren, John, Madison, Hannah, Haley, and 13 great grandchildren.Copyright © 2019, ABC Radio. All rights reserved.