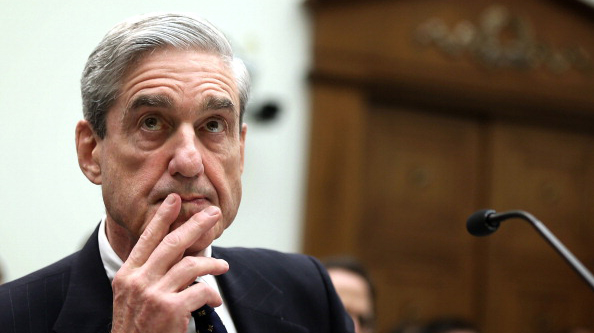 (WASHINGTON) — After denying he would watch former special counsel Robert Mueller’s congressional testimony this week, President Donald Trump on Monday conceded he’d “maybe” tune in and “see a little bit of it.””No, I’m not going to be watching,” Trump told reporters in the Oval Office Monday, before adding, “Probably, maybe I’ll see a little bit of it. I’m not going to be watching Mueller because you can’t take all those bites out of the apple.”Mueller is scheduled to testify before two congressional committees for five and a half hours. Television networks are planning special, live coverage, and Trump had said Friday he did not plan to watch.In a tweet earlier Monday, Trump accused Democrats on Capitol Hill of wasting time on “this ridiculous Witch Hunt.” Trump often claims the report found “no collusion” and “no obstruction,” but Mueller did not, in fact reach a conclusion on obstruction. And while the investigation did not find sufficient evidence to establish if there was a conspiracy between the Trump campaign and Russia, it did detail several “offers of assistance to the [Trump] campaign” by the Russian government.Democrats have pushed Mueller to testify since he released his report in April. Members of the House Intelligence and Judiciary committees are scheduled to question him starting Wednesday morning lasting into the afternoon, but acknowledge the hearing might not produce the blockbuster results they hope it will.”We hope it won’t end up being a dud and we’re going to ask specific questions,” Rep. Jerry Nadler, D-N.Y., the chairman of the House Judiciary Committee, told “Fox News Sunday.” “We’re going to ask specific questions about look at page 344 paragraph two, please read it, does that describe obstruction of justice and did you — did you find that the president did that, for example.”Rep. Adam Schiff, D-Calif., the chairman of the House Intelligence Committee, told CBS’ “Face the Nation” that most Americans “haven’t had the opportunity to read that report–and it’s a pretty dry, prosecutorial work product.”We want Bob Mueller to bring it to life, to talk about what’s in that report,” he said. “It’s a pretty damning set of facts.”

House committee probing Jan. 6 attack could subpoena Trump aides: Sources
Ray J responds to rumors of a second sex tape with Kim Kardashian: “This ain’t cool”
Billy Porter reveals why he wants to say “thank you” to Elizabeth Taylor
Chelsea Handler has a new boyfriend
Smaller COVID vaccine doses may protect children as well as full doses in adults: Pfizer
Uma Thurman reveals she had an abortion when she was a teen: “It has been my darkest secret until now”