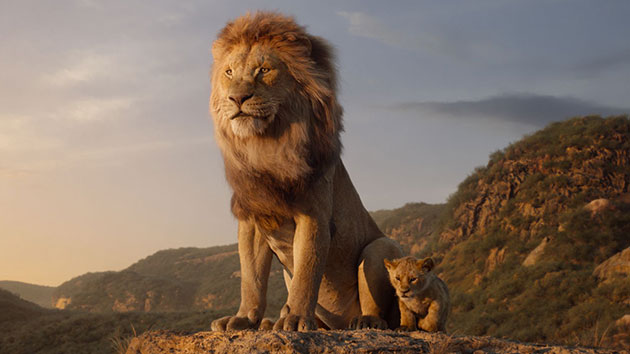 (NEW YORK) — It was a historic weekend for a pair of Disney films, as the live-action remake of The Lion King and Marvel’s Avengers: Endgame both entered the record books.

The Lion King roared to number one at the box office with an estimated $185 million debut — a record-breaking opening for a July weekend. It surpasses the previous record of $169.1 million set by Harry Potter and the Deathly Hallows in 2007. It’s also ranks as the second-largest opening of the year so far, and the seventh-largest of all time.

If you’re of the opinion that the film is CGI-animated, rather than live-action, you can add largest opening ever for an animated feature as well, since it’s also topped Incredibles 2’s $182.6 million debut last year.

Also over the weekend, Marvel’s Spider-Man: Far from Home took second place after topping the box office in its first two weeks of release, earning an estimated $21 million. That brings its domestic total to almost $320 million.

Pixar’s Toy Story 4 took in an estimated $14.6 million for a third-place finish. After five weeks its domestic tally stands at north of $375 million, and just under $860 million globally.  In fourth place is the horror film Crawl with an estimated $6 million, followed by the rom-com Yesterday, rounding out the top five by earning $5.1 million.

In limited release, David Crosby: Remember My Name, the documentary on the legendary folk singer, delivered an estimated $41,050 from four locations.

Marvel and Pixar are owned by Disney, the parent company of ABC News.

The FDA panel decision on vaccine boosters shows the process worked: Fauci
A family promise led her to Mount Cristo Rey, the site of a pilgrimage for those seeking a miracle
How LA County countered recall-election disinformation in real time on social media
Police searching ‘vast’ preserve for Brian Laundrie, boyfriend of missing 22-year-old Gabby Petito
Hostess assaulted at NYC restaurant after asking Texas patrons for proof of COVID-19 vaccination
‘We are prepared’: Law enforcement stresses readiness ahead of right-wing rally