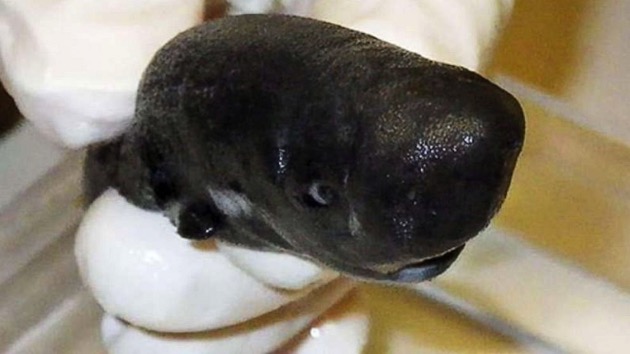 (NEW ORLEANS) — Scientists have discovered a new species of tiny shark that glows in the dark in the Gulf of Mexico.Researchers first happened upon what is now known as Mollisquama mississippiensis, or the American Pocket Shark, in 2010 while observing the feeding of sperm whales in the gulf, according to a new Tulane University study published in the animal taxonomy journal Zootaxa.The shark was collected, and Mark Grace of the National Marine Fisheries Service Mississippi Laboratories of the National Oceanic and Atmospheric Administration noticed its special features while examining the collected specimens for a NOAA survey in 2013, according to a statement from Tulane University.

The newly discovered shark, which measures in at just 5.5 inches, releases a bioluminescent fluid to attract prey, according to the study. It is a subspecies of the kitefin shark.The only other known specimen of its kind was captured in the eastern Pacific Ocean in 1979 and is housed at the Zoological Museum in St. Petersburg, Russia. However, both are “separate species, each from separate oceans,” said Grace said.”The fact that only one pocket shark has ever been reported from the Gulf of Mexico, and that it is a new species, underscores how little we know about the gulf,” said Henry Bart, director of the Tulane Biodiversity Research Institute.Both species are “exceedingly rare,” Grace said. Notable differences include fewer vertebrae in the shark and numerous light-producing photophores that cover much of the body in Gulf shark, but both have two small pockets that produce luminous fluid, one on each side of its gills.Other glow-in-the-dark sharks previously discovered include the Scyliorhinus rotifer, a chain catshark, and the swell shark, which has a “twinkling” pattern, according to Live Science.Copyright © 2019, ABC Radio. All rights reserved.

What is Title 42? Amid backlash, Biden administration defends use of Trump-era order to expel migrants
3 dead in Amtrak train derailment in Montana
The push for electric vehicles may be killing sedans for good: Experts
Culture thrives in America’s most Hispanic, Latino state: New Mexico
GOP-led review of Arizona ballots reaffirms Biden’s win
Harris interview with ‘The View’ delayed after co-hosts test positive for COVID-19