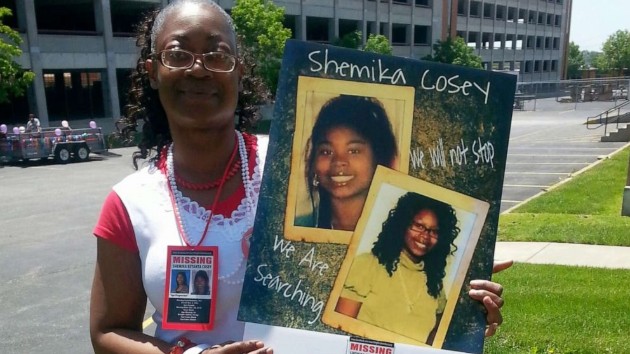 (NEW YORK) — Paula Hill is sharing the prettiest photos of her missing daughter Shemika that she can still find. Sitting on an old bed with a quilted top, she poured through boxes of memories. Some were of her middle child in pigtails. Others were pictures taken at high school homecoming. All of them show her daughter’s shy smile. This is the Shemika she wants America to see, someone worth fighting for, and someone she hopes the world will help her bring home.Shemika Cosey disappeared a few days after Christmas in 2008. She was spending the night watching movies at a cousin’s house, just outside St. Louis. “On December the 28, that was the last day that I seen her,” says Hill. “December the 28, 2008. And it was a normal day.”Cosey was 16 years old at the time, and was in and out of the home several times that night. There was someone fighting for her attention outside. When everyone woke up in the morning, Cosey was gone. “The door was cracked. Her coat and purse was gone. But her overnight bag was still there,” says Hill. Police discovered an unlocked door, and decided that Cosey had run away, so they never searched for the girl, according to Hill. It is a common complaint from the families of missing black Americans — that police are quick to say that their loved ones “ran away” and so no foot search is necessary, advocates for missing children say. “Do I believe she left on her own with someone? Yes,” says Hill. “But she was intending to come back. She was intending to come back home. She was not intending to stay gone for 10 years.” Hill says there were signs someone had a hold on her daughter. She once saw her inside a dark sedan with a much older man. She worried her teenage girl was smoking marijuana, and says she once discovered a fake ID that her daughter was using to sneak into local nightclubs. Hill worries her daughter is the victim of sex-trafficking.When the police allegedly refused to search the streets, Hill and her family searched on their own, handing out flyers with her daughter’s photo. “I need her to get away,” Hill says. “Wherever she is, when she get away, she’ll be home. I miss her. I love her. I need her. The family needs her.” Shawndrea Thomas is a local television news reporter and anchor who also produces a podcast, “Intrigued Full Effect,” following the stories of missing black Americans. She covers cases that are often ignored, and Shemika Cosey was one of her first. “Shemika Cosey’s story was different in that she just vanished without a trace,” says Thomas. “There was no body found ever. You know back then social media wasn’t happening as much as it is now so she didn’t really have a social media footprint.” “It has been difficult to get some of these stories told as it comes to missing people of color, or cold cases involving people of color,” Thomas adds. Cosey’s friends have been little help, according to her mother. “I got a little information from them,” Hill says. “We tried to talk to some of her girlfriends that lived downstairs. We stayed in an apartment complex in Hazelwood, Missouri. And the girls downstairs, because they were underage, we asked the parents. And the parents said no, they didn’t want to get involved.Hill says she broke down in tears the day she and her two other children moved, and the day she was forced to change the number to her cellphone. “Yeah, it was very hard. I was in the store crying my eyes out. The number — the only number that she knew. And I had to get all that changed. It’s like, I always wonder, like, is she going to be able to find me? If she get away, she gotta find me,” Hill says. During her move, Hill found three notebooks with written messages her daughter had passed to a friend in class, just a few months before her daughter’s disappearance. In them, the 16-year-old talks about a boyfriend, and that she might be pregnant. Hill has not given the notebooks to investigators. “Why didn’t they come to my house and search her room when she came up missing?” Hill says. “I mean, ’cause they didn’t care. So why should I give these to them?” Major Art Jackson, an African American officer at the Berkeley Police Department, tells us his team could use the notebooks, and cites them as an example of the strained relationship that law enforcement has with the family. But police also report that calls are now starting to come in about Shemika, after all these years. “Two weeks ago, we got — we got a call,” Major Jackson says. “And we’re gonna follow up on any and all leads that we get.” Hill has started a support group for families with loved ones who are missing. They warn parents who find themselves in these situations to act quickly, and to not wait for authorities. They say those first 48 hours after a loved goes missing are incredibly important. Hill is confident her daughter will make it back home. “She knows Mama is wondering where she is,” says Hill. “So I want my baby to know we miss you, we love you, we need you home. She is loved. And we’re waiting on her.”