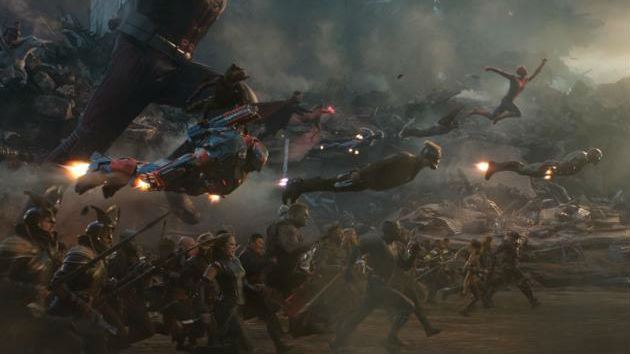 (LOS ANGELES) — Over the weekend, Avengers: Endgame finally de-throned Avatar as the highest-grossing movie of all time, and in a post on Twitter, James Cameron officially passed the crown.

Cameron posted a picture that shows Iron Man surrounded by floating sprites from Avatar’s alien planet, Pandora. The picture features — in the language of his blue-skinned alien heroes the Na’vi — a greeting that translates to “I see you, Marvel.” In English, the picture also features the legend: “Congratulations to Avengers: Endgame on becoming the new box-office king.”

In response, Endgame’s directors Joe and Anthony Russo took to Instagram to thank Cameron. They posted a shot from his first hit, 1984’s Terminator, along with their silhouettes, as if they were in their movie seats, saying in tandem, “Holy sh**!” They said of Cameron, “[Y]ou’re a monumental reason why we fell in love with film in the first place. Thank you for always inspiring us and opening the world’s eyes to what’s possible.” They continued, “We can’t wait to see where you take us next…” perhaps referring to the *four* Avatar sequels on which Cameron is working.

Back in May, Cameron congratulated Marvel Studios when Endgame sailed past Cameron’s Oscar-winning film Titanic, which at the time was the second-highest grossing film of all time. With $2.1 billion in the bank, it’s now number three.

What is Title 42? Amid backlash, Biden administration defends use of Trump-era order to expel migrants
Trump return to White House ‘would be a disaster’ for US intelligence: Former DHS whistleblower
Pfizer CEO says it’s possible to distribute both boosters and primary doses
The push for electric vehicles may be killing sedans for good: Experts
GOP-led review of Arizona ballots reaffirms Biden’s win
Harris interview with ‘The View’ delayed after co-hosts test positive for COVID-19