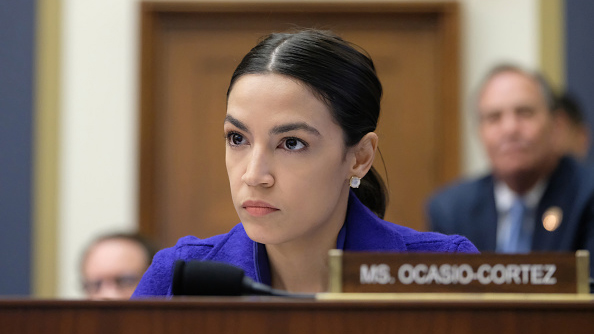 (NEW ORLEANS) — A police chief in Louisiana is promising to take action against one of his officers who reportedly posted on Facebook that Rep. Alexandria Ocasio-Cortez is a “vile idiot” who “needs a round” but the chief said he didn’t view the post as a threat.“This vile idiot needs a round,” officer Charlie Rispoli allegedly wrote on Facebook Thursday. “And I don’t mean the kind she used to serve.”Ocasio-Cortez, D-N.Y., worked as a bartender before she got elected.A screenshot of the comments was obtained by nola.com, which reports on the greater New Orleans area. The website said the reported post and the officer’s Facebook page have been taken down.Rispoli was apparently responding to an article titled “Ocasio-Cortez on the Budget: ‘We Pay Soldiers Too Much,’” posted by a website which describes itself as “ network of parody, satire, and tomfoolery.”Gretna, Louisiana, police chief Arthur Lawson told nola.com Friday that he was disturbed by the post.“I will tell you this: This will not go unchecked,” he said. “I’m not going to take this lightly and this will be dealt with on our end. It’s not something we want someone that’s affiliated with our department to make these types of statements. That’s not going to happen.”The chief also said that the post appeared to violate the department’s social media policy but that he did not think it constitutes a threat.Neither Lawson nor Rispoli have responded to ABC News’ requests for comment. Ocasio-Cortez has not responded to the reported posting, either.Ocasio-Cortez is part of a group of freshman Democrats known as “The Squad” who have been on the receiving end of online attacks and were told by President Donald Trump to “go back where you came from” on Twitter. They have also been some of his strongest critics in Congress.The four lawmakers, Reps. Ocasio-Cortez, Ilhan Omar, D-Minn., Rashida Tlaib, D-Mich. and Ayanna Pressley, D-Mass., were subject to another Facebook attack on Friday by the Republican County Chairmen’s Association of Illinois, which posted and then deleted a mimic movie poster depicting them as “The Jihad Squad.” This is one of the latest attempts to characterize this group of Congresswomen as being un-American.Mark Shaw, the president of the Republican political organization, apologized on Sunday for the post saying that it was not authorized by him to be posted.“This unauthorized posting is an unfortunate distraction from the serious debate surrounding the policies advocated by these four socialist members of the United States House of Representatives of which I strongly disagree,” Shaw posted on Facebook.

Watch trailer to Will Smith’s ‘Welcome to Earth’; David E. Talbert to develop musical series ‘Madelyn Square Gardens’; and more
Beck Bennett, Lauren Holt out at ‘SNL’, Aristotle Athari, James Austin Johnson and Sarah Sherman added to cast
After quitting the fashion industry, supermodel Halima Aden is back — this time, on her own terms
6-year-old boy follows mom’s instruction to leave mask on at school, wears it in school photo
Vaxxed ‘Dancing with the Stars’ pro Cheryl Burke quarantines after positive COVID-19 test
Facebook is ‘pausing’ development of Instagram Kids amid mounting backlash