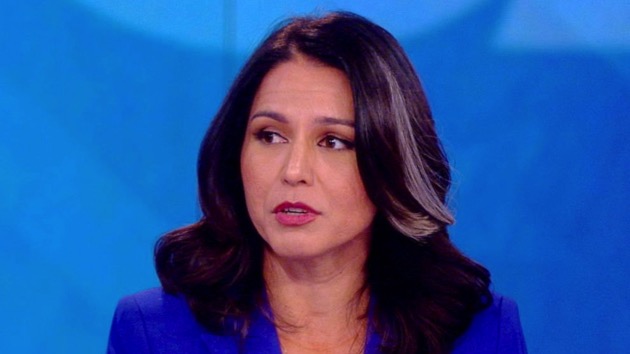 (NEW YORK) — Rep. Tulsi Gabbard Gabbard appeared on The View Monday and once again came to the defense of “The Squad”, calling out President Donald Trump for his remarks that four of her fellow female colleagues of color in the House should “go back” to where they came from.”The president is inciting racism and violence in our country as a whole, this is what’s so dangerous about what he’s doing. He’s using his platform to incite this racism and bigotry,” she told the hosts adding. “When President Trump says he’s saying love it or leave it, right, what he’s really saying is, love me or leave, he’s making it about himself.”Last week, she told ABC News’ Senior Washington Reporter Devin Dwyer that Trump’s remarks had what she described as devastating consequences.Over the weekend Gabbard traveled to Puerto Rico to show solidarity with protesters calling for the resignation of Gov. Ricardo Rosselló following a series of scandals including the leak of controversial group chats involving the Governor and several of his top advisers and cabinet officials.On Friday, the Hawaii Congresswoman was the first politician to travel to Puerto Rico in support of protests. While there, Gabbard called on her fellow 2020 contenders to travel to the island to support protesters calling for the resignation of Rosselló.On Sunday, Rosselló said in a Facebook Live video, “I will not seek reelection as governor next year. Additionally, I am resigning as president of the New Progressive Party.”Gabbard however in series of tweets called for the resignation of Rosselló. In a video she said, “whichever one of us is elected will be the leader of the Democratic Party.”She added, “it’s important for us to let Democrats know to let all Americans know that we will stand up against corruption and for the people even when that corruption is within our own ranks.”Last week, Gabbard received a big boost after Hip Hop artist Cardi B posted an altered cover of Rolling Stone Magazine on Instagram. The magazine cover from earlier this year originally had the image of Speaker Nancy Pelosi with Reps. Alexandria Ocasio-Cortez, Ilhan Omar and Jahana Hayes.For the meme Cardi posted, replaced Pelosi with Gabbard.This is a developing story. Please check back for updates.Copyright © 2019, ABC Radio. All rights reserved.

What is Title 42? Amid backlash, Biden administration defends use of Trump-era order to expel migrants
The push for electric vehicles may be killing sedans for good: Experts
Harris interview with ‘The View’ delayed after co-hosts test positive for COVID-19
‘The View’ hosts leave mid-show due to testing positive for COVID-19, miss Vice President Harris interview
A special Bond: Daniel Craig named honorary commander in the Royal Navy
Gabourey Sidibe shares the special connection she has to her new podcast thriller ‘If I Go Missing the Witches Did It’