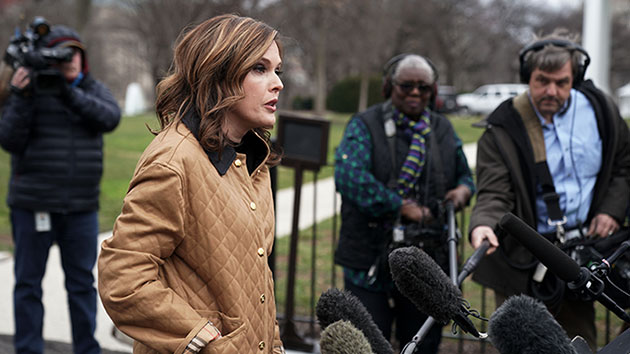 (WASHINGTON) — Mercedes Schlapp, a Trump campaign senior adviser, defended President Donald Trump amid ongoing and escalating attacks aimed at four freshman congresswomen on Sunday.”I have worked with President Trump for two years and he is not a racist,” Schlapp, who left the White House in June to join the campaign, told ABC News Chief Anchor George Stephanopoulos on ABC’s This Week.”He is a results-oriented president who is focused on helping uplift all Americans — including blacks, including Hispanics,” Schlapp added.When confronted about the president’s seemingly shifting stance regarding a recent campaign rally crowd erupting in “send her back” chants aimed at Rep. Ilhan Omar, Schlapp said Trump “made it very clear” that he disavowed the chant, yet “stands with those people in North Carolina.””The president disavowed the chant. The president made it clear that he wasn’t happy with the chant,” the Trump campaign aide said. “He made it very clear he disagreed with the chant, and I will tell you he stands with those people in North Carolina — across the country — who support him.”Schlapp’s comments follow the president’s shifting response to the backlash that erupted after thousands of rally goers at his Greenville, North Carolina, rally chanted “send her back” about Omar last week.The chants themselves came only days after the president launched an attack on four progressive congresswomen of color — Reps. Alexandria Ocasio-Cortez, D-N.Y.; Rashida Tlaib, D-Mich.; Ayanna Pressley, D-Mass; and Omar — telling them to “go back” to the countries they came from.Three of the representatives were born in the U.S., while as a child Omar came to the U.S. as a refugee.Earlier Sunday morning, the president again targeted the self-proclaimed “Squad” on Twitter, writing that the progressive members of color are not “capable of loving our Country.””They should apologize to America (and Israel) for the horrible (hateful) things they have said. They are destroying the Democrat Party, but are weak & insecure people who can never destroy our great Nation!” the president wrote.Schlapp defended the president’s attacks, even when confronted about Trump criticizing America during his 2016 campaign.”Look, they are fundamentally criticizing the United States,” the Trump campaign aide said. “They are being anti-American. That, to us, is very concerning.”The former White House aide also took aim at the four progressive congresswomen, arguing that, thanks to their politics, “the Democratic Party is in disarray.””These Democratic presidential candidates are going to have to kiss the ring of the squad because they are the new voices of the Democrat Party, and that should be concerning,” Schlapp said.While the Trump campaign initially defended the rally chant, the president on Thursday told reporters in the Oval Office that he “was not happy with it” and “I disagree with it.” However, Trump appeared to walked back his disavowal of the chant the next day, telling reporters when asked about the chant: “No, you know what I’m unhappy with — the fact that a congresswoman can hate our country.””I’m unhappy with the fact that a congresswoman can say anti-Semitic things. I’m unhappy with the fact that a congresswoman — in this case, a different congresswoman — can call our country and our people ‘garbage.’ That’s what I’m unhappy with,” Trump said.The president also argued last week that he “very quickly” started talking once the “send her back” chants started, despite letting the chant go on for about 13 seconds without saying a word. When pushed by ABC News Chief White House Correspondent Jonathan Karl on why he didn’t begin speaking sooner, the president claimed he did.”If you would have heard, there was a tremendous amount of noise and action and everything else,” he said. “I started very quickly. And I think you know that.”The president later tweeted that he “did nothing to lead people on, nor was I particularly happy with their chant.” President Trump also continued to praise rally goers as “a very big and patriotic crowd. They love the USA!”Copyright © 2019, ABC Radio. All rights reserved.