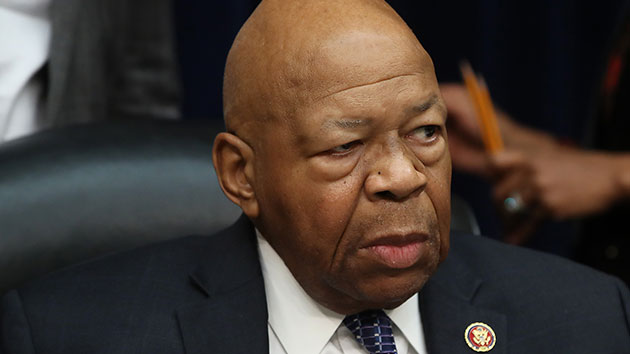 (WASHINGTON) — House Oversight Committee Chairman Elijah Cummings said chants at a Trump rally on Wednesday were the echo of chants he heard as a child attempting to integrate a pool.On President Donald Trump’s tweets and attacks on Reps. Alexandria Ocasio-Cortez, Ilhan Omar, Ayanna Pressley and Rashida Tlaib, he said, “I just don’t think this is becoming of the president of the United States of America,” in an interview with ABC News Chief Anchor George Stephanopoulos on This Week Sunday.Trump tweeted an attack on the four freshmen Democratic congresswomen last Sunday, saying, “why don’t they go back and help fix the totally broken and crime infested places from which they came. Then come back and show us how it’s done.”Three of the four congresswomen were born in the U.S. The fourth, Omar, came to the U.S. as a refugee when she was a child.Cummings joined a chorus of criticism of Trump’s tweets on Twitter Tuesday, calling them “racist, xenophobic, deeply offensive to many Americans,” and adding that they “have no place in the dialogue of the world’s greatest democracy.”He also said in an interview with the Baltimore Sun that the tweets reminded him of shouts from a white mob as he and other African-American children attempted to integrate a Baltimore pool in the 1960s.”I don’t think these Republicans or Trump fully understand what it feels like to be treated like less than a dog,” Cummings said in that interview.The president’s tweets led to a resolution in the House of Representatives formally condemning the remarks, which passed on Tuesday.Supporters chanted “send her back” after Trump criticized Omar at a rally on Wednesday. The next day, the president said he disagreed with the chants.

The president also argued that he “very quickly” started talking once the “send her back” chants started, despite letting the chant go on for about 13 seconds without saying a word. When pushed by ABC News Chief White House Correspondent Jonathan Karl on why he didn’t begin speaking sooner, the president claimed he did.Also on Thursday, ABC News correspondent Kyra Phillips asked Trump if he thought the chants were racist, and the president said “no.””You know what’s racist to me? When someone goes out and says the horrible things about our country, the people of our country,” he said. Copyright © 2019, ABC Radio. All rights reserved.