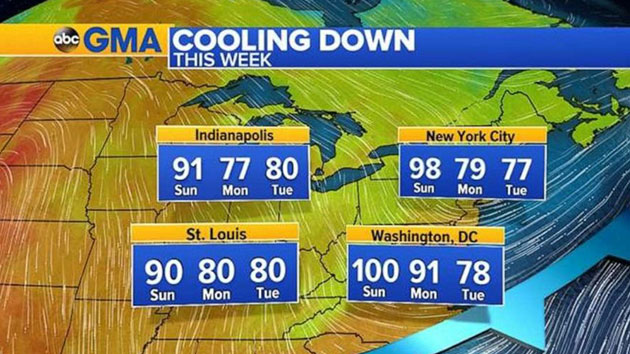 (NEW YORK) — Ninety-four million people in parts of 23 states remain under excessive heat warnings and heat advisories on Sunday as one last day of scorching temperatures hits the Midwest and East Coast.Sunday is the last day of oppressive heat, with many places in the Upper Midwest already feeling cooler Sunday morning after heat indices of 115 to 120 on Friday and Saturday. That seasonably cool air will make its way east this week.JFK International Airport and Atlantic City, New Jersey, both set daily record highs at 99 degrees Saturday, but most records being set are for the warm overnight temperatures. New York City and Boston are just two of many cities that set or tied record-high minimum temperatures, with temperatures failing to drop below 80 degrees.Heat indices far surpassed the triple-digit mark across the eastern U.S. on Saturday:- Hartford, Connecticut: 110 degrees; actual high 95- Washington, D.C.: 108 degrees; actual high 97- Kansas City, Missouri: 109 degrees; actual high 98- Baltimore: 107 degrees; actual high 100- Boston: 107 degrees; actual high 97- Chicago: 107 degrees; actual high 95Heat index values continued to feel higher than 90 degrees overnight from Norfolk, Virginia, to Boston.The excessive heat warnings remain in effect for Sunday, with heat indices reaching 110 degrees.Actual temperatures will stay in the 90s for most of the East Coast — often in the upper reaches.Boston has another chance of hitting 99 on Sunday — the hottest temperature since 2013.Washington, D.C., could also hit 100 degrees for the first time since 2016.The relief is finally making its way east, though.It’s already significantly cooler across the Great Lakes and Midwest.Chicago; Minneapolis; Des Moines, Iowa; and Detroit felt like 105 to 119 degrees. The high temperatures Sunday are in the 70s and low 80s.Those temperatures will reach the East Coast early this week, and there will be a nice break from the heat and humidity with below-average temperatures.More severe weather possibleSeveral rounds of severe storms across the Midwest and Great Lakes have knocked out power to hundreds of thousands and caused widespread damage. There were over 430,000 customers without power Sunday morning across Wisconsin and Michigan.There were more than 240 storm reports just from Saturday, and more than 450 storm reports between Friday and Saturday.Winds gusted 70 to 80 mph and brought down numerous tree limbs, and thousands of power lines from South Dakota to Minnesota, and in Wisconsin and Michigan.The severe weather will be focused around Missouri and Kansas again on Sunday. The main threat again is damaging winds, along with hail and also an isolated tornado.Storms will be scattered from Missouri to Pennsylvania, but have the potential to be severe at times with damaging winds.Copyright © 2019, ABC Radio. All rights reserved.