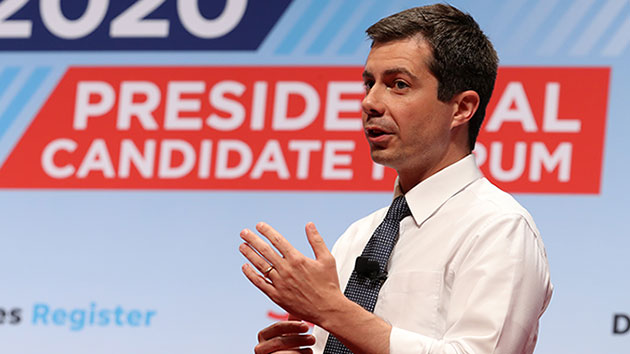 (WASHINGTON) — All of the Democratic presidential candidates have condemned Donald Trump’s racist comments directed at four congresswomen last week, and the chants of “send her back” directed at Rep. Ilhan Omar at a rally a day later, but Pete Buttigieg took it a step further on Saturday.Buttigieg, the mayor of South Bend, Indiana, was stumping in Iowa over the weekend, where he told ABC News that the issue of white supremacy — an accusation often lobbed at Trump by the left — “could be the lurking issue that ends this country.”The mayor said the current climate could escalate, going as far as to mention the Civil War.”We’ve had a lot challenges in this country, but the one that actually almost ended this country in the Civil War was white supremacy,” Buttigieg said. “It could be the lurking issue that ends this country in the future, if we don’t wrangle it down in our time.”The number of hate groups as been on the rise under Trump, according to the Southern Poverty Law Center. The nonprofit, which tracks hate groups, including white nationalist organizations, released a report this spring saying groups have increased by 30% in the past four years.”Amid the era of Trump, hate groups have increased once again, rising 30 percent over the past four years,” the report says. “And last year marked the fourth year in a row that hate group numbers increased after a short period of decline. In the previous four-year period, the number of groups fell by 23 percent.”Buttigieg has dealt with issues of race throughout his campaign, especially in recent weeks after the shooting of a black man by a white police officer in his hometown of South Bend. He even briefly left the campaign trail to return home and address the issue. Buttigieg was greeted by jeers from protesters at a press conference and public forum about the shooting last month.The officer has remained on paid leave, sparking a petition by residents to get him suspended from the force. Buttigieg has said he does not have the power as mayor to make that decision. Only the Board of Public Safety — composed of five civilians appointed by the mayor — can suspend or fire an officer involved in a shooting, he told Nightline earlier this month.But Buttigieg has been honest about needing to create more diversity in the police department in South Bend. He said he has tried to do so, somewhat unsuccessfully, but will continue to push for it.”The key to dealing with racial discussions in the country is honesty,” Buttigieg said Saturday. “And that means honesty about how we got here. It means honesty about what we are up against.””Also, in my view, it means treating racial inequality as a specialty issue, as an issue to be talked about with audiences of color only — but as something that frankly white Americans need to take more seriously,” he added.Buttigieg added further weight to the topic on Saturday, saying, “The entire American experiment is at stake in whether we can manage to deliver prosperity in a way that your race has no bearing on your income, your wealth, your employment opportunities, your experience with criminal justice, your ability to vote.””We’re just not there, and we won’t get there until we acknowledge that replacing a racist historical structure with a more neutral current one is not enough,” he said.Copyright © 2019, ABC Radio. All rights reserved.

How COVID-19 hybrid immunity could be a potential pandemic game-changer
Now you can own James Bond’s DB5 — the book, that is
‘﻿Blue Bayou’﻿ shines a light on this issue that many have “no clue” about
Texas school district that included masks in dress code hit with restraining order
Browns Star Odell Beckham to be held out this weekend
Kate Winslet, Jason Sudeikis and Scarlett Johansson make this year’s ‘TIME’ 100 list