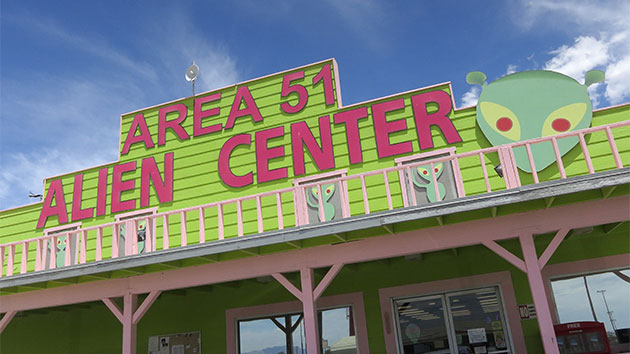 (NEW YORK) —  When a California college student created an event to meet aliens at Area 51, he had no idea he was setting the groundwork to entertain millions of earthlings.

Matty Roberts created the Facebook event “Storm Area 51, They Can’t Stop All of Us,” on June 27 as a joke, never imagining that it would blow up into a viral event with 1.8 million people registered as attend on Sept. 20 and another 1.3 million interested.

With the unexpected tidal wave of interest, Roberts is taking the event offline.

He’s now thinking seriously about hosting an actual event: an “out of this world” experience in the Nevada desert.

Area 51 is located in the highly-classified remote detachment of Edwards Air Force Base, where conspiracy theorists believe UFO spacecraft are kept.

“I want to make it like a festival of sorts, a bunch of different music artists, everyone from the EDM world, maybe some indie rock, maybe some smaller guys who are up and coming,” Roberts, 20, of Bakersfield, California, told KERO-TV. “I’ve had a lot of people DM [direct message] the page and say they’re bands want to play there, which would be super cool.”

“People kind of want to know what’s in there,” Roberts said in an interview, for which he dressed as the anime character Naruto Uzumaki, who he referenced in the event posting. “I think a lot of people are going to show up because it’s kind of a meme.”

“If we naruto [sic] run, we can move faster than their bullets. Lets see them aliens,” Roberts wrote, referring to the Japanese anime “Naruto” title character’s distinct running style, in which he runs with his arms outstretched behind him.

Roberts said he met many people through the event’s page — including a few true zealots who told him, “I’m wiling to die for the government!”

“I figured the FBI would have shown up by now,” Roberts, who is studying petroleum engineering, said. “I don’t want anyone to get hurt. This came up as a pure struck of imagination it was meant to be funny.”

The event has already caught the interest of authorities.

On Thursday Air Force spokesperson Laura McAndrews told ABC News in a statement: “The United States Air Force is aware of the Facebook post. The Nevada Test and Training Range is an area where the Air Force tests and trains combat aircraft. As a matter of practice, we do not discuss specific security measures, but any attempt to illegally access military installations or military training areas is dangerous.”

If Storm Area 51 does succeed as a festival, it has already caught the interest of at least one potential partner — Budweiser.

“Screw it. Free Bud Light to any alien that makes it out,” Bud Light’s official Twitter account wrote.