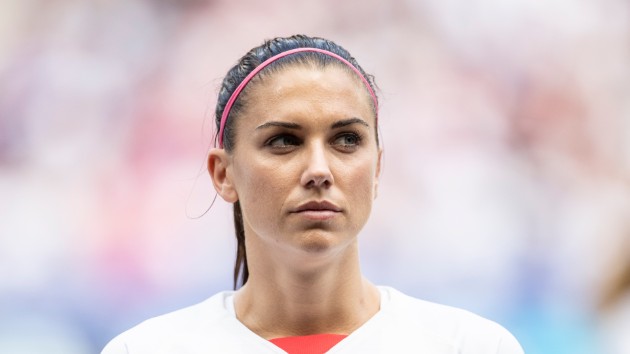 (NEW YORK) — Alex Morgan and the rest of the U.S. women’s national team are still riding high after their victory earlier this month at the World Cup, a parade celebration in New York City right afterwards, and then being honored with an award at the 2019 ESPYs last week.But their work is just beginning.Fans across the globe have been supporting the team’s quest for equal pay within their sport, so that women can finally stand shoulder to shoulder financially with men on the field.Morgan was part of a panel Thursday in New York City, sponsored by the DICK’S Sporting Goods Foundation, to talk about the lack of access financially for both young boys and girls in sports, and what can be done to give kids unfettered access to learn countless lessons that will help propel them to success later in life.She was joined by Jon Gruden, Larry Fitzgerald and Jalen Rose, among others.Gruden, who moderated the panel, congratulated Morgan on the World Cup win, but shared some staggering facts with the audience, including that girls are twice as likely to quit team sports as they enter the high school age in this country. They are also more than 10 percent less inclined to ever play sports as a teen compared to boys, according to two recent studies by the RAND Corporation and the Women’s Sports Foundation.Prompted with these figures, Morgan opened up about girls needing role models within sports, like the U.S. team, to show them what they can accomplish if they continue to play. She also spoke about what’s next in the team’s battle for equality.”You look at the age that girls stop playing and that’s in between 12 to 14,” she said. “I think there’s a lot of social pressures,” she said of why girls tend to give up sports as they get older.Morgan also spoke about sisterhood and her best friends on the team, something that the girls who quit sports will never get to experience. Something that the research also shows kids from high poverty areas have trouble gaining access too, as well.To combat this, DICK’S is planning to fund in the coming months up to one million kids to play through its Sports Matter program.”There’s so many things, especially girls, they can learn from life lessons you wont find in school and elsewhere,” she continued.”You think about the successes and the failures that you might otherwise not have been faced with,” she added. “Those are things mentally and physically I had to overcome and I feel like a better person for them.”Representation matters, and the 30-year-old said more national events like this year’s World Cup, featuring women kicking butt and soccer balls on the field, can inspire girls to pick up a pair of cleats.”The World Cup … was huge, the numbers were massive,” she said. “I think when you see investment on women’s sports, you see the return coming in … I think that could be one way for girls to get inspiration, get more role models, be encourage to play sports.”When the topic of equal pay came up, Morgan admitted, “I definitely have been faced with gender inequalities, as have all my teammates.”The team famously sued the The United States Soccer Federation earlier this year for gender discrimination, citing unequal pay as one of the main points of contention.”It’s an issue we are trying to tackle,” she said, adding that her team also noticed there is a lack of opportunity for women to even be able to play sports and compete outside the U.S.”Becoming a world champion back-to-back obviously helps, gives us a platform to address these issues,” she said, adding that getting support from stars like Taylor Swift and Sandra Bullock means the world to them. “It’s so amazing to see not only our fans tune in, but also celebrities, actresses, singers, women of different areas of work, all standing up and feeling inspired to speak out.””We are turning the page, with women really fighting for each other,” she added.As for what’s next, Morgan is happy the fight for equality is “very public right now and at the forefront.””A lot of people are talking about it and I’m happy they’re talking about it,” she said. “The goal is that we work together with U.S. Soccer to overcome this hurdle.”She also wants the team to continue to be pioneers in women’s soccer, and advocate for opportunities for women around the world to play and enjoy the sport she loves so much.”You are seeing this globally, women’s soccer is becoming more respected,” she said. “I think we’ve always been at the forefront of it and I want to continue to do so.”Copyright © 2019, ABC Radio. All rights reserved.