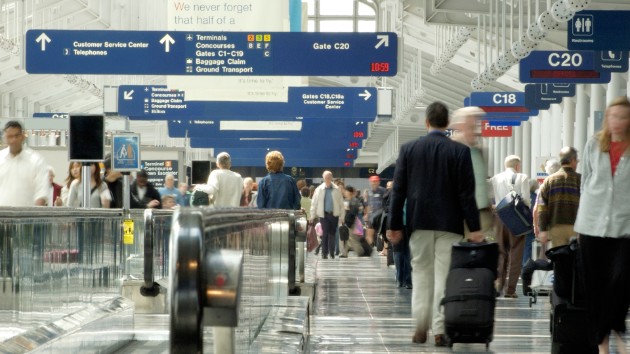 (CHICAGO) — Three children, all American citizens, were detained for several hours at Chicago O’Hare International Airport on Thursday after their adult companion was deemed “inadmissible” by U.S. authorities and their undocumented parents declined to pick them up out of fear of deportation.U.S. Customs and Border Protection confirmed that the three children arrived at the airport with a female Mexican citizen that officers determined did not have a valid visa.”Officers have attempted numerous times today to reach family members to pick up the children,” according to a CBP statement. “As of 2 p.m. CST CBP Officers are still awaiting a legal guardian to arrive and pick the children up.”Officials said the mother has since picked up the children “without incident.”A government official familiar with the case told ABC News that the authorities did not know the parents were undocumented when they called them and the children were not detained in an attempt to trap the parents.CBP has not said, however, why the adult was denied entry.Iriz Gutteriez Berrios, a staff attorney for the West Suburban Action Project, or PASO, said the children — girls ages 13, 10 and 9 — were detained upon arrival from Mexico at 3 a.m. The adult traveling with them was a cousin with a valid visa, the group said.Berrios said the group became aware of the situation after getting called by the Mexican Consulate, which had been contacted by the parents who were afraid that the detention was a trap to detain and deport them.Around noon, PASO founder Mony Ruiz-Velasco arrived at the airport with signed permission from the parents, giving her permission to get the kids at the airport, the group said.That permission was apparently not enough, and the kids were not released until the mother arrived. She was not arrested.The advocacy group PASO said her fear was founded.”We’ve seen other scenarios where someone is picking someone else up, in this case the parents had the instinct to call someone else before responding to CBP,” said Gutteriez Berrios.According to the Chicago Sun-Times, Democratic Illinois Rep. Jan Schakowsky learned of the situation shortly after landing at O’Hare and went there to help the family.”I feel that it’s a kind of kidnapping of children by our government and I am really fed up,” Schakowsky told the paper.Illinois Gov. JB Pritzker tweeted he was in touch with CBP officials about the case, saying “using children as pawns to advance a racist and xenophobic immigration policy is appalling and un-American, and I will not let it stand in Illinois.”Copyright © 2019, ABC Radio. All rights reserved.