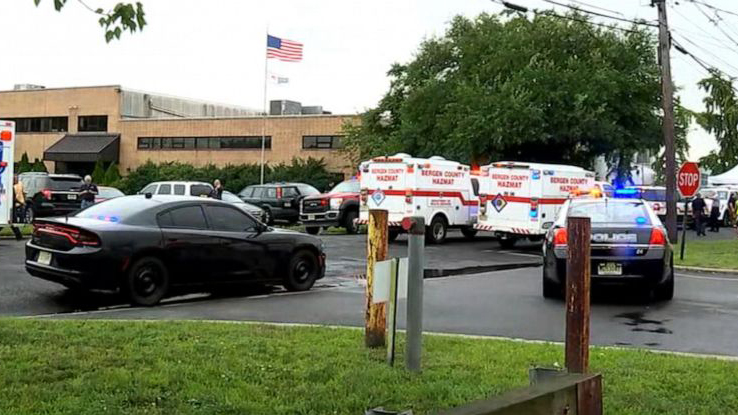 (NEW YORK) — Two workers were injured and nearby residents were temporarily placed under a shelter-in-place order after a fire caused a chemical reaction at the Diamond Chemical Co., according to New Jersey authorities.Rutherford police announced on Thursday at around 2:30 p.m. that a chemical problem had been reported in East Rutherford.”Shelter in Place and turn off your air conditioners on the east side of town immediately,” the department wrote in a Facebook post. “A Shelter-in-Place is in effect and the east side of town should turn off air conditioning units as well immediately. East side of town is from Ridge Road to the meadows. This is for residences and businesses..”Officials said that the fire was caused by machines being unmonitored, according to ABC News station WABC-TV. All of the workers were able to evacuate the plant. The police said that hazmat was checking the air quality and had reported no bad readings.”Everybody just scrambled out,” worker Jimmy Ellis told WABC-TV. “We saw it. We cut off our machines and we started scrambling out the exits. And then all of the sudden, as we got to the back of the railroad tracks, then the alarm went off.”A little after 4 p.m., hazmat teams completed additional air quality checks and determined that it was safe to lift the shelter-in-place order, according to Rutherford police.Residents were told that they could turn their air-conditioning units on again.The injuries to the workers at the Diamond Chemical Co. were minor, according to ABC News station WABC-TV.

Alaska once had the highest vaccination rate. Now it’s in a COVID-19 crisis.
Priyanka Chopra responds to growing criticism over ‘The Activist’: “The show got it wrong”
In theaters now: Gerard Butler and Frank Grillo in the “irreverent, explosive” ‘COPSHOP’
Louisiana residents frustrated by FEMA aid process weeks after Hurricane Ida
These vaccine mandates are already in place to attend school in the US
What to expect as FDA advisory panel debates Pfizer COVID booster shots