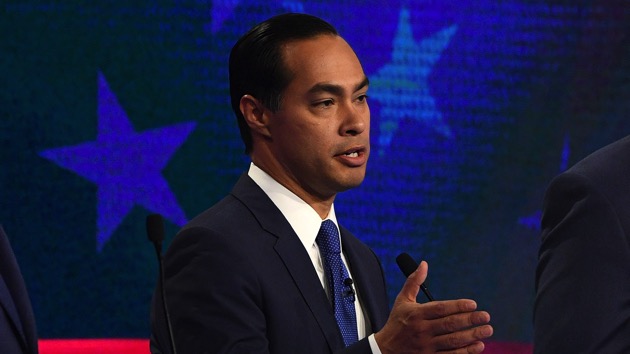 (WASHINGTON) — As tensions rise in San Juan, Puerto Rico following reports of controversial leaked group chats between Gov. Ricardo Roselló and a number of his advisers and Cabinet members, former Obama administration Housing and Urban Development Secretary Julián Castro is the first Democratic presidential candidate to call on Roselló to resign.“Americans in Puerto Rico are holding Governor @ricardorossello accountable for his disgraceful comments & corruption,” Castro wrote in a tweet Friday. “I stand with the Puerto Ricans in the streets protesting for his resignation. Excessive force against them is not acceptable.”Castro’s Tweet comes after several of his opponents have expressed solidarity with Puerto Rican protesters, but do not match his calls for a resignation.Among the candidates who have voiced support of the protestors via tweets, Sen. Elizabeth Warren, South Bend, Indiana Mayor Pete Buttigieg, former Rep. Beto O’Rourke, and author Marianne Williamson.Castro also told Buzzfeed while at event in Manchester, New Hampshire that he doesn’t “think that Rosselló can be effective anymore…The way they’ve treated the people of Puerto Rico, the administration has treated the people of Puerto Rico, I believe that he should resign.”Castro’s calls for a resignation comes after days of dramatic protests shutting down streets in San Juan, Puerto Rico, with protestors demanding Gov. Roselló give up his seat after a series of leaked group texts released by the Center of Investigative Journalism revealed Roselló and some of his closest advisers and Cabinet members speaking about female politicians and reporters in misogynistic terms and making jokes about the number of dead bodies in the aftermath of Hurricane Maria. Gov. Roselló has said he will not resign.President Trump weighed in on the protests Thursday, tweeting “a lot of bad things are happening in Puerto Rico. The Governor is under siege,” before also attacking San Juan Mayor Carmen Yulín Cruz, who was the target of some of the misogynistic messages. Cruz has said she is on the side of the protesters.Back in January, Castro’s first trip as a presidential candidate was to Puerto Rico. While there he criticized the federal government’s response to the crisis following Hurricane Maria. Two other candidates who have visited Puerto Rico this election cycle are Sen. Warren and Sen. Amy Klobuchar.Puerto Rico participates in primary elections, but they do not ultimately vote in the November 2020 presidential election. Copyright © 2019, ABC Radio. All rights reserved.