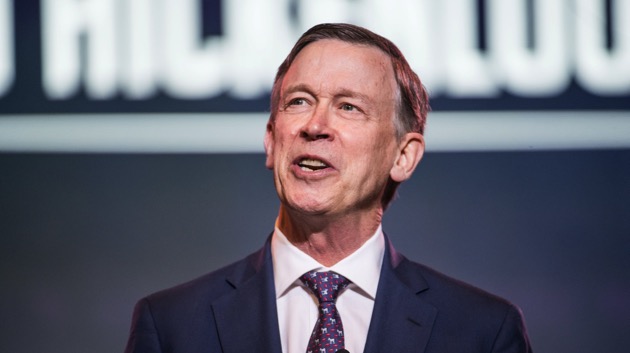 (NEW YORK) — Former Governor John Hickenlooper told the hosts of The View that, despite low fundraising figures and polling numbers, he believes “this campaign is wide open.””I think all politics is about how you communicate things…But you don’t quit,” he said. “You just keep trying to shake things up… I think this campaign is wide open… if I get my message out – I’m the one candidate who’s actually done the big progressive things others are talking about.”He launched his 2020 bid appealing to both sides of the Democratic aisle – those on the progressive wing – and moderates in the center field. With a pitch leaning on his Western roots and decades of experience and success as a purple state businessman, mayor and governor – he attracted initial notice for his ability to bring together warring political factions in a state that swings with the Rocky Mountain winds.But in the wake of a debate performance where his increasingly middling bid was not re-energized by the spark of a breakout moment – polls after saying he failed to stand out on a crowded stage – even after weeks of volleyed barbs with Sen. Bernie Sanders, I-Vt., over socialism; his staff began to see an uphill trail and a donation jar half-empty. The campaign’s second quarter FEC filings reveal just $1.15 million raised – and, sources familiar with the situation tell ABC News, just about 13,000 donors – about one tenth what’s needed to qualify for the September debate.Six key aides abruptly left the campaign – sources telling ABC News, growing frustrated after urging him to withdraw and pursue other options – but the former governor would not be deterred.“I think most people haven’t really started paying attention yet,” he said on The View. “If I get focused on my message, I think that I’m the one person out of all the people running is actually done the big progressive things that everyone else is just talking about.”The next generation of the Hickenlooper campaign presses on as well and says they undaunted by their currently thin financial margins. His new communications director Peter Cunningham told ABC News he’s now focused on sharpening their message – one they feel voters will respond to – Hickenlooper’s proven record of centrist leadership and contrasting accomplishments with aspirations.”We’re trying to find the lane that gets people to pay attention,” Cunningham says. “People want fireworks – they want Kamala Harris and Joe Biden arguing about busing. But that’s not the number one issue people are voting on.”Hickenlooper worries that the American Dream is at risk and is focused on jobs, the economy and retirement and the candidate feels that he can offer tangible solutions to save that dream in a way that other candidates simply propose.Copyright © 2019, ABC Radio. All rights reserved.