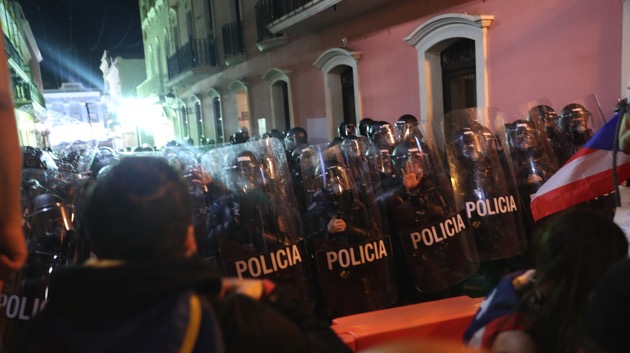 (WASHINGTON) — President Donald Trump weighed in for the first time on the protests in Puerto Rico, where thousands have called on Gov. Ricardo Rosselló to resign.Trump’s tweets come as the unrest on the island grew more violent Wednesday night, when police fired tear gas on those marching in San Juan.The president tweeted the people of Puerto Rico “are great” but “much of their leadership is corrupt” — a charge he’s made before.He noted Rosselló was “under siege” and, as he has before, lambasted San Juan’s mayor, Carmen Yulín Cruz, saying she “is a despicable and incompetent person who I wouldn’t trust under any circumstance.”The mayor has made clear in recent days that she’s on the side of the protesters, and she was also among the targets of the profanity-filled secret Telegram chat group that included the governor and other top officials that helped spark the protests.

A lot of bad things are happening in Puerto Rico. The Governor is under siege, the Mayor of San Juan is a despicable and incompetent person who I wouldn’t trust under any circumstance, and the United States Congress foolishly gave 92 Billion Dollars for hurricane relief, much….

A lot of bad things are happening in Puerto Rico. The Governor is under siege, the Mayor of San Juan is a despicable and incompetent person who I wouldn’t trust under any circumstance, and the United States Congress foolishly gave 92 Billion Dollars for hurricane relief, much….

In a new statement issued Thursday morning, Rossello acknowledged the widespread protests, saying they “have not gone unnoticed for me, my family and certainly for anyone in Puerto Rico.”He said he respected the demonstrations “not only as a democratic exercise, but as a natural manifestation of the anger at recent events,” but criticized what he said were the minority of protesters who “chose the wrong methods and violence, even with the use of weapons, Molotov cocktails and other explosives, causing injuries and impacting officers of the Puerto Rico Police.””This challenge to law and order will be addressed accordingly,” he said of the violent demonstrators.”In the past few days I have apologized to the Puerto Rican people and that request remains alive. I have the commitment, stronger than ever, to carry out the public policy for which we have worked so hard in all areas of government. I recognize the challenge before me for recent controversies, but I firmly believe that it is possible to restore confidence and that we can, after this painful and painful process, achieve reconciliation,” he said.The uproar began Saturday, after the nonprofit journalism group Center of Investigative Journalism published nearly 900 pages of conversations from a leaked group chat between Rosello and several top aides that detail efforts to manipulate public narratives, operations to discredit negative press coverage and criticism of opposition leaders.The conversations, made through the Telegram app, also contain sexist, homophobic and misogynistic comments from the members of the group, according to the report. These messages have not been independently authenticated by ABC News. After the revelation of the messages, Rossello announced the resignation of a number of government officials including Luis Rivera Marin, the secretary of state.Copyright © 2019, ABC Radio. All rights reserved.

What is Title 42? Amid backlash, Biden administration defends use of Trump-era order to expel migrants
Trump return to White House ‘would be a disaster’ for US intelligence: Former DHS whistleblower
After people spoke out about COVID-19 vaccines and period changes, research is underway
Jan. 6 select committee sends first subpoenas to former Trump aides, advisers
James Marsden jokes about 15-year gap between ‘Enchanted’ and ‘Disenchanted’: “I never felt older”
US special envoy to Haiti resigns in protest over deportations