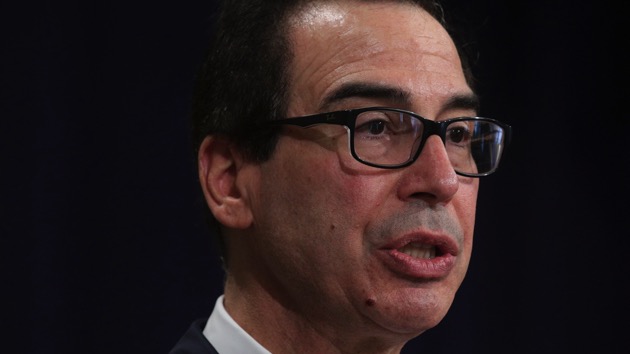 (WASHINGTON) — Treasury Secretary Steve Mnuchin expressed confidence a budget deal with Democrats could be reached ahead of a looming deadline, but said hurdles still remain for negotiations between the Trump administration and Democrats on Capitol Hill.On Thursday, during an interview on CNBC, Mnuchin said the Trump administration, House and Senate have agreed on raising the federal borrowing limit for two years and have set budget cap numbers for 2020 and 2021.”The good news is we’ve reached an agreement between the administration, the House and the Senate on top line numbers for both year one and year two. We’re now discussing offsets, as well as certain structural issues and we’ve agreed as a part of that deal, there would be a long-term two-year debt ceiling increase,” Mnuchin said on “Squawk Box.””So I think all of our first choice is to try to reach an overall agreement and we are working hard to do that. But if for whatever reason we don’t get there in time I am encouraging a debt ceiling increase,” he added.Mnuchin warned House Speaker Nancy Pelosi in a letter that the Treasury Department could run out of money in early September, and asked for an increase to the debt ceiling before Congress leaves for summer. Congress leaves for recess on July 26, leaving little time for negotiators to strike a deal.In the meantime, Democrats have balked at the reported $150 billion in budget the Trump administration has demanded to offset spending increases. At stake is the potential for another government shut down after the fiscal year ends Sept. 30.On Wednesday, Mnuchin spoke on the phone with Pelosi and Senate Minority Leader Chuck Schumer. He said he has plans to talk with Pelosi again Thursday. He was at a meeting in France with G7 finance ministers.Despite the ticking clock, Mnuchin sounded optimistic about reaching a deal before Congress skips town.”I don’t think the market should be concerned. I think that everybody is in agreement that we won’t do anything that puts the U.S. government at risk in terms of our issue of defaulting. And I think that nobody wants a shutdown in any scenario,” Mnuchin said.Pelosi said that she hopes to present legislation to floor by next Thursday.”That’s so that we can send it in a timely fashion to the Senate so that they can go through their, shall we say, particularly senatorial process to get it done in time before they leave,” she said.President Donald Trump has not weighed in on the current negotiations.Copyright © 2019, ABC Radio. All rights reserved.

SEC admits error in Penn State-Auburn game
How LA County countered recall-election disinformation in real time on social media
Latinos in sports are drawing on their heritage to inspire others
McAuliffe, Youngkin spar over vision for commonwealth in first Va. gubernatorial debate
COVID-19 live updates: More than 10,000 new deaths reported in US in one week
Murdaugh murders and mysteries timeline: Key events in the South Carolina family’s scandals and deaths