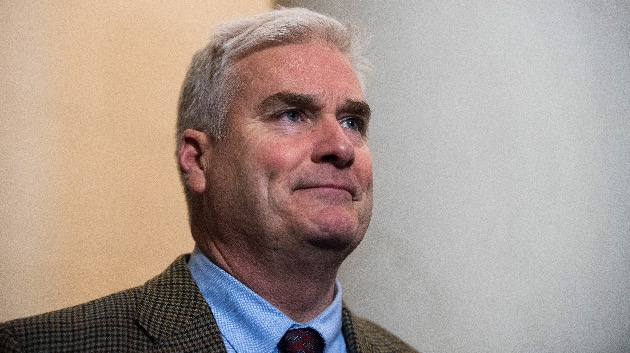 (WASHINGTON) — The congressman leading Republicans’ efforts to retake the House in 2020 disavowed the “send her back” chants at President Trump’s rally last night in North Carolina, saying there’s “no place for that kind of talk.””I didn’t watch the rally last night, sorry, but there’s no place for that kind of talk. I don’t agree with it,”Rep. Tom Emmer, R-Minn., the chairman of the National Republican Congressional Committee, appearing at a Christian Science Monitor breakfast with reporters Thursday.Emmer also defended Trump, saying he doesn’t have a “racist bone” in his body and that the criticism has been “manufactured” by Democrats in Washington.The House voted on Tuesday to condemn Trump’s attacks, and one Texas Democrat forced the House to consider an impeachment resolution against Trump based on the attacks, which was defeated in an overwhelming vote on Wednesday.”What he was trying to say he said wrong. What he was trying to say is that if you don’t appreciate this country you don’t have to be here,” Emmer said. “It has nothing to do with your race or gender, or your family history. It has to do with respecting and loving the country that is giving you the opportunities that you have.””I had somebody say to me recently, ‘You know when Ilhan talks, Ilhan makes it look like she lets people believe she hates America.’ Now I don’t know if that’s true, but as somebody said to me back at home, they said to me, ‘How about a little gratitude with that attitude?"”Emmer was referring to freshman Congresswoman Ilhan Omar, D-Minn., who Trump lambasted for comments about 9/11 and al-Qaida. In a highly controversial tweet, Trump told Omar, as well as New York Rep. Alexandria Ocasio-Cortez and other members of the “squad” of progressive female Democrats to “go back” to their home countries.Three of the four members of the group — Ocasio-Cortez, Rashida Tlaib and Ayanna Pressley — were born in the U.S. and Omar was a refugee from Somalia who came to the U.S. as a teen.Asked if he would advise Republicans to break with the president — particularly around his comments on race — Emmer said “I’m not gonna tell somebody what they should do.”The Minnesota Republican also defended the NRCC’s hardball messaging tactics this cycle.After the House vote to condemn Trump’s attacks on Tuesday, the NRCC flooded reporters’ email inboxes with messages referring to Democrats as “deranged.” The committee has also increasingly given Trump-style nicknames to Democrats, a tactic that has been criticized by current and former House Republican lawmakers.The NRCC is an “organization whose job is to define who they are, to make it clear to the American public,” Emmer said.The committee is working, as Trump has done, to make Ocasio-Cortez and her colleagues the new face of the Democratic Party, and lump all Democrats in with their progressive proposals.”If you want to call them the ‘Squad,’ you should call them the ‘Leadership Squad,"” Emmer said. “The rest of their conference you can call the new ‘Red Army of Socialists."”Copyright © 2019, ABC Radio. All rights reserved.

Beck Bennett, Lauren Holt out at ‘SNL’, Aristotle Athari, James Austin Johnson and Sarah Sherman added to cast
After quitting the fashion industry, supermodel Halima Aden is back — this time, on her own terms
6-year-old boy follows mom’s instruction to leave mask on at school, wears it in school photo
Drugging allegations at Northwestern frat houses spark protests
How Lee Pace got into godly shape for Apple TV+’s sci-fi epic ‘Foundation’
Legacy and landscape at stake for Pelosi, Biden: The Note