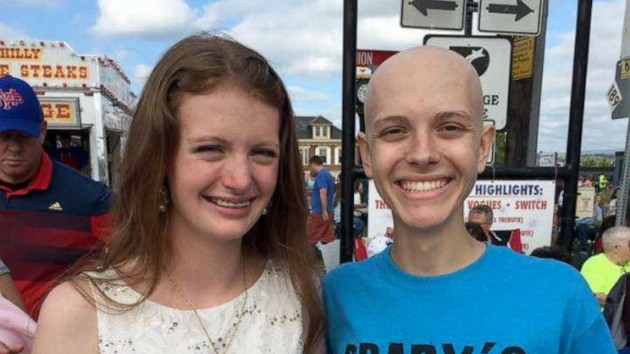 (MT. PLEASANT, Pa.) — A Pennsylvania teen won’t let a rare form of bone cancer stop him from saying “I do” to his high school sweetheart.Brady Hunker says he was “instantly drawn” to Mollie Landman the moment he saw her in seventh grade at their school in Mt. Pleasant, Pennsylvania.”My mom says I would come home and just say, ‘Mollie this’ and ‘Mollie that,"” Hunker told ABC News’ Good Morning America.The couple officially started dating four years ago “and the rest is history,” she added.”Even before Brady’s diagnosis, we were always seen as a very different couple because we were always seen as very big Christians and put God first,” said Landman, whose father is a pastor.They credit their faith for helping them remain positive when Hunker was diagnosed in July 2016 with Ewing sarcoma, a rare form of bone cancer, in his right leg.”It was the size of a brick when they found it,” he said.Hunker began treatments at Children’s Hospital of Pittsburgh. Landman stayed by his side through it all.”I couldn’t think of anyone in the world at our age who would’ve been by my side and stuck with me through this,” he said.Hunker’s cancer went into remission for about a year but came back in March 2018 during his junior year of high school, “and it was pretty much everywhere.”The two began to have serious conversations about marriage when Hunker’s cancer relapsed.”You don’t know what the future holds, so we just wanted to spend as much of that time together as we could,” Hunker said.The two got engaged at a Christian camp this past April.”I thought it was really special,” Landman said.Due to Hunker’s diagnosis, the couple wants to get married as soon as possible, but have limited funds to pay for a wedding.Hunker created a campaign on GoFundMe to help raise money for some of the wedding costs.”I want the love of my life to have the wedding she always dreamed of,” the GoFundMe description reads.The campaign went viral online and exceeded its goal of $15,000 in two months. Any extra money raised will help pay for their honeymoon and fulfill a “bucket list” of places the couple wants to visit.”We never even dreamed that this page would’ve blown up the way it did and can’t even comprehend their generosity,” Landman told GMA.The couple plans to wed later this month, surrounded by their friends and family.”I can’t wait to take this next step together,” Hunker said.Copyright © 2019, ABC Radio. All rights reserved.