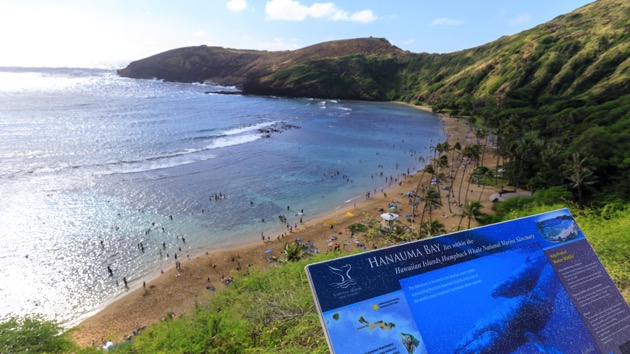 (HONOLULU) — After a dramatic rescue in Hawaii’s high surf, ocean safety officials on the island have doubled down on the importance of adhering to posted warnings.A married couple from Oklahoma on vacation in Oahu allegedly ignored warnings for a photo opp and got swept out to sea by one of the biggest swells of the year.Witnesses told ABC News that the couple fell into the ocean after they went down a cliff, past warning signs to a remote area in hopes of taking photos. While witness Chevz Rafael took video, his wife, who did not want to be named, called 911.The raucous waves separated the couple, and Rafael captured footage of the woman drifting away as waves began to crash overhead.Lt. Kawika Eckart, who oversees the lifeguards that conducted the couple’s rescue Sunday, told ABC News the team in Hanauma Bay was prepared for anything.”We had a jet ski operator in the ocean already due to the high surf; they responded from around the coast and met up with the [other] two lifeguards,” Eckart said. “We put them on our jet ski and brought them into Hanauma Bay.”Shayne Enright, the PIO officer for Honolulu Emergency Services Department, told ABC News she reached out to the couple, who has not been identified, and confirmed they are in stable condition.Eckart, who has been a lifeguard for 30 years, said this is not the first time onlookers have risked their safety for a picture in unsafe conditions on a cliff coastline with no lifeguard on duty.”People tend to want to take that picture and end up getting swept out into the ocean. For us to respond, it takes time. You’re not at a guarded beach,” he explained. “By that time there could be trouble.”The lifeguards, who arrived within nine minutes, credited the bystanders for keeping an eye on the couple and immediately calling for help.Copyright © 2019, ABC Radio. All rights reserved.

‘We are prepared’: Law enforcement stresses readiness ahead of right-wing rally
Statue of Bitcoin founder honors mysterious ‘god’ of cryptocurrency
COVID-19 live updates: More than 10,000 new deaths reported in US in one week
Tyra Banks defends Olivia Jade ahead of her ‘Dancing with the Stars’ debut: “Olivia is so brave”
‘Ted Lasso’? ‘WandaVision’? ‘Mare of Easttown’? Who will clean up on Sunday’s Emmy night?
Jennifer Aniston says season 2 of ‘The Morning Show’ ﻿will tackle cancel culture