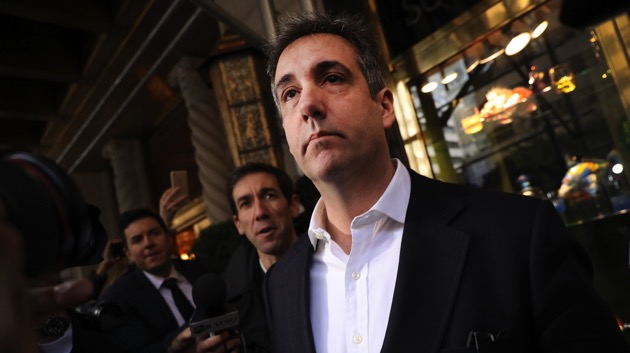 (WASHINGTON) — President Donald Trump and his campaign may have had prior knowledge of a deal to silence Stormy Daniels, the adult film actress who allegedly engaged in an extra-marital affair with the then-presidential candidate in the weeks leading up the 2016 election, newly-unsealed court records suggest.In unredacted search warrant documents revealed Thursday, an FBI special agent described a series of phone calls in October of 2016 between the president’s former personal attorney, Michael Cohen, the president’s then-campaign press secretary, Hope Hicks, and Trump himself.In between calls with Hicks and Trump – one of which was a three-way phone conversation – Cohen communicated by text and phone with two executives at American Media Inc., publisher of The National Enquirer, at times immediately afterwards. In those discussions, Cohen repeatedly invoked the name “Keith,” referring to Keith Davidson, the lawyer representing adult film-star Stormy Daniels.The content of these communications is not made explicit by the FBI agent, but the timing suggests the group was discussing the hush-payment deal with Daniels.In a footnote in the documents, the FBI special agent says Hicks later told investigators that “to the best of her recollection, she did not learn about the allegations made by Clifford until early November 2016. Hicks was not specifically asked about this three-way call.”During her testimony before Congress last month, Hicks denied ever being present during conversations between Cohen and Trump about Daniels, or ever having direct knowledge of Cohen’s payments to Daniels.Two sources familiar with the probe told ABC News neither Hicks nor anyone else would be charged in the as it relates to the investigation in the Southern District of New York.These new revelations come from a cache of documents unsealed on Thursday after the judge in Cohen’s case ordered prosecutors to make public some documents related to Cohen’s campaign finance violations, which he pleaded guilty to in August.The violations to which Cohen pleaded guilty stem from the hush-money agreements which the documents released Thursday show were possibly being discussed by Cohen, Hicks and Trump.Cohen was sentenced to 3 years in prison for his admitted crimes. He’s been in ongoing cooperation with prosecutors since he entered his plea. During his plea hearing, Cohen told the court he had made payments to the women “in coordination and at the direction of a candidate for federal office” who was later identified as Trump.These new records were unsealed by an order from U.S. Judge William Pauley, who said that “every American” should have the opportunity to “scrutinize” the materials after prosecutors signaled that they had ended their investigation into the Trump Organization’s involvement in the hush money payments.”The campaign finance violations discussed in the materials are a matter of national importance,” Judge Pauley said, denying the government’s request for limited redactions.The government confirmed the conclusion of the its investigation in a letter filed Thursday.On Wednesday, after Judge Pauley suggested that the government’s probe had concluded, the president’s attorney, Jay Sekulow, said the president’s legal team was “pleased” by the news.Cohen’s attorney, Lanny Davis, however, expressed displeasure with prosecutors decision to drop the proceedings in his own statement issued Wednesday evening.“Case closed? Why is Michael Cohen — after all his voluntary cooperation and testimony that Mr. Mueller said was credible and went to “core issues” and all the information and documents he voluntarily provided to prosecutors and to congress — the only member of the Trump company to be prosecuted and imprisoned?” Davis said in the statement. “Especially since prosecutors found that virtually all of Michael’s admitted crimes were done at the direction of and for the benefit of Donald Trump? Why?”In a statement of his own that he made from prison on Thursday, Cohen said that “as I stated in my open testimony, I and members of The Trump Organization were directed by Mr. Trump to handle the Stormy Daniel`s matter; including making the hush money payment. The conclusion of the investigation exonerating The Trump Organization`s role should be of great concern to the American people and investigated by Congress and The Department of Justice.”During his congressional testimony in February, Cohen testified that he had “pled guilty in federal court to felonies for the benefit of, at the direction of, and in coordination with Individual #1” who is known to be Trump. Trump has denied these claims.Cohen had previously testified before Congress, and later pleaded guilty to lying about elements of his first testimony. Copyright © 2019, ABC Radio. All rights reserved.

Pediatricians with kids speak out about delta surge fears
COVID-19 live updates: More than 10,000 new deaths reported in US in one week
Tyra Banks defends Olivia Jade ahead of her ‘Dancing with the Stars’ debut: “Olivia is so brave”
More than 600,000 flags on National Mall stand witness to America’s COVID dead
Utah police release body camera image of Gabby Petito after apparent fight with boyfriend
Andrew Garfield details the “amazing, beautiful way” he honored his late mother with musical film ‘Tick Tick… Boom!’