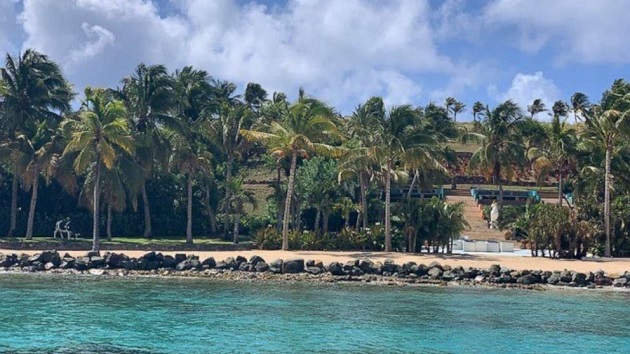 (NEW YORK) — A former IT contractor for Jeffrey Epstein who said that he ended their business relationship over personal concerns about gaggles of apparently unsupervised young women on the embattled financier’s private island told ABC News that his reluctance to continue working there was underscored by what he said was an extensive collection of photos of topless women displayed throughout the island’s compounds. “There were photos of topless women everywhere,” said contractor Steve Scully, who said he worked for Epstein for six years beginning in 1999. “On his desk, in his office, in his bedroom,” Scully, a 69-year-old father of three girls, said of the private island dubbed “Little St. James.” Scully told ABC News that he was the chief owner and operator of a telecommunications business on the island of St. Thomas when he was contracted by Epstein to set up a communications network on Little St. James. During his employment, he estimated that he visited the exclusive island more than 100 times.He said his memories of Epstein remain vivid.“He was the most intense person I ever met,” Scully said.Epstein, 66 — who at one time socialized with former President Bill Clinton, Great Britain’s Prince Andrew, and President Donald Trump — has been charged with alleged sex trafficking of minor girls in Florida and New York. Some of the charges date back to the early 2000s.Epstein has denied the charges. An attorney for the financier did not immediately respond to a request for comment about Scully’s claims.A team of law enforcement officers from the Federal Bureau of Investigation (FBI) and the New York Police Department (NYPD) took Epstein into custody at the Teterboro Airport in Bergen County, New Jersey, after he returned to the United States by private jet from France, sources told ABC News.Epstein wanted phone or internet access nearly everywhere on the 72-acre island, Scully said, including in a secluded cove that the financier referred to as “the grotto.” Given his work in high-volume financial trading, Scully said, Epstein “never wanted a call to drop” because of weak digital coverage on the island.The island’s primary compound was arranged in a “Danish style” layout — with individual bedroom suites in individual buildings surrounding a courtyard, Scully recalled, including a pair of large cockatoo statues lording over the island’s gardens. He said that at one point, he recalled Epstein wanting to change the name of the island from “Little St. James” to “Little Saint Jeff.”The lush, secluded paradise off the eastern coast of the U.S. Virgin Islands remains well-maintained despite Epstein’s incarceration, with imported palm trees that line the island’s sandy perimeter like toy sentries.An ABC News producer that rode past the island on a rented boat this week witnessed employees wearing light blue polo shirts buzzing around the property on golf carts. The shoreline is dotted with little buoys marked with “LSJ” — identifying the island “Little St. James.”On a recent afternoon, a group of a dozen men and one woman, wearing the light blue polos, disembarked from a power boat docked at American Yacht Harbor in Red Hook. ABC News attempted to speak with them, but most declined for fear, they said, of losing their jobs. Other former or current employees who have worked on Little St. James refused to speak on the record, citing an existing NDA or fear of retribution.A colorful building that some news reports have called the “temple” was actually a gym where Epstein worked out when he was on the island, Scully said, noting in an interview with ABC News that the gym had a memorable feature — a massive framed photo of a topless woman.Scully said he also recalled another notable feature of the island’s residences.“He had stacks and stacks of extreme martial arts DVDs,” Scully said.But it’s what Scully said he saw on the island itself more than six years ago that led him to agree to an interview with ABC News: revolving groups of young girls that appeared to him to be minors who were guests on the island.“They couldn’t have been more than 15 or 16 years old,” he said.Scully said that he would see them on the island whenever he visited for work, riding ATVs, or at times bathing topless on the island’s pools and beaches.Scully said he became increasingly alarmed by the presence of these groups of young girls that appeared to him to be without any visible parental supervision.“The truth is, I was there for 6 years,” he explained. “I really started seeing things weren’t normal in the first year. And I started … I wear shame and guilt,” he confessed. Because you know what? When you allow money to dictate your moral consciousness, you’ve lost all idea of moral consciousness. It’s not about the money. It can’t be.”ABC News reviewed invoices provided by Scully during the time period of his employment, each billed to “Little St. James” — one of Epstein’s corporations. Scully estimated that he did about $400,000 worth of business with Epstein — something that he said he now regrets.While he said that he hasn’t spoken to Epstein in more than a decade, Scully said that he still recalls some of the financier’s more peculiar practices.Scully described a storage room on the island with “stacks and stacks of brand new Lacoste white polo shirts, all size medium.”When he inquired about the unusual supply of identical attire, he said that he was told that the shirts were for “Mr. Epstein.”He said that he was told by an employee on the island that Epstein only wears a shirt once, and then discards it, to be turned into rags for the housekeeping staff. A representative for Epstein could not immediately be reached for comment on Scully’s claims.

Democrats lash out at Biden administration over handling of Haitian migrants
Mom dying of ovarian cancer shares what she wants women to know about the deadly disease
Billy Porter reveals why he wants to say “thank you” to Elizabeth Taylor
Nicole Kidman reflects on her marriage to Tom Cruise: “I was young”
‘We grieve together,’ Pelosi says at COVID-19 flags memorial
Biden found images of border agents with migrants ‘horrific and horrible,’ White House says