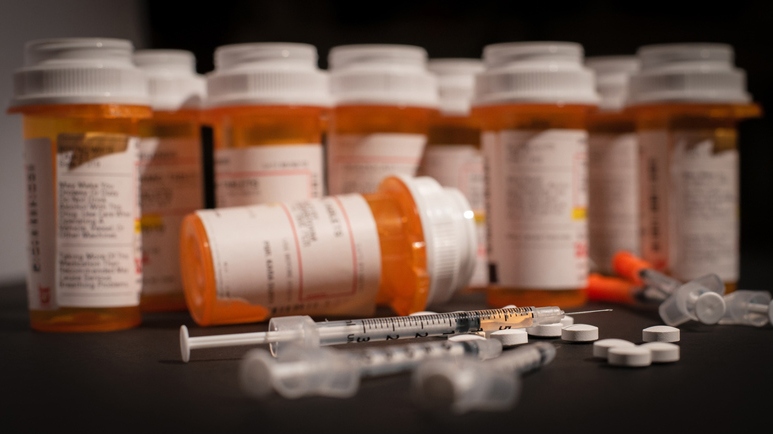 (NEW YORK) — Two former pharmaceutical executives and two pharmacists were charged on Thursday by federal prosecutors in Ohio with conspiring to distribute controlled substances.Anthony Rattini, the former president of pharmaceutical distributor Miami-Luken and James Barclay, the former compliance officer of Miami-Luken were charged alongside pharmacists Devonna Miller-West and Samuel “Randy” Ballengee, according to court documents.In one instance, prosecutors claim that Miami-Luken distributed 3.7 million hydrocodone pills to a single pharmacy in Kermit, West Virginia — a town with a population of about 400 people from 2008 to 2011.That averages out to 9,250 hydrocodone pills for every resident of the town.Neither attorneys for the four defendants or the defendants themselves immediately responded to ABC News requests for comment. Three of the four defendants were arrested on Thursday morning, officials said. An arrest warrant for Barclay remained outstanding as of Thursday evening.It is alleged in court documents that the pharmaceutical executives filled suspicious orders from the two pharmacists in an effort to enrich themselves while the opioid crisis in the Appalachian region was peaking.Distributor Miami-Luken made over $173 million in profit from 2008 to 2015, according to federal prosecutors, and was a drug wholesaler for 200 companies in West Virginia, Kentucky and Ohio.Miami-Luken, continued to fill large, suspicious orders even after being warned, prosecutors charge.“Today’s arrests should be a wake-up call to distributors and pharmacists who are allowing opioid prescription pills to be illegally sold and dispensed from their facilities,” Drug Enforcement Administration (DEA) Assistant Administrator John Martin said in a release. “These actions will not be tolerated by the DEA, and they will be brought to justice.”The company closed up shop earlier this year according to local news reports.In addition to the hydrocodone pills that the former executives allegedly distributed 2.2 million pills over the span of two years to a pharmacy that prosecutors say had been cut off by other wholesalers.The former executives also allegedly distributed 1.8 million Oxycontin’s to a doctor and pharmacy that was believed to be under DEA investigation for over prescribing, those entities are not named.In one instance, Ballengee, who ran Tug Valley Pharmacy in Williamson, WV, purchased 120,700 hydrocodone pills from Miami-Luken and from 2008-2014 bought 6 million dosage units of hydrocodone.”It was further part of the conspiracy that Devonna Miller-West and Samuel “Randy” Ballengee purchased excessive amounts of controlled substances from Miami-Luken through their respective pharmacies,” prosecutors charged in court filings. “As pharmacists, Devonna Miller-West and Samuel “Randy” Ballengee failed to ensure that controlled substances were distributed properly, for a legitimate medical purpose, ignoring obvious signs of abuse and diversion.”The records go on to contend that Miller-West and Ballengee “distributed controlled substances, namely oxycodone and hydrocodone, Schedule II and III controlled substances, to customers outside the scope of professional practice and not for a legitimate medical purpose.”

Britney Spears makes triumphant return to Instagram, but some fans think someone else is running the account
Biden to focus on ‘intensive diplomacy’ at UN amid tensions with allies
Republicans dig in on debt-limit standoff despite Democratic effort to mount pressure
‘Dancing with the Stars’ season 30 recap: JoJo Siwa’s historic first performance puts her atop leaderboard
“Ugh! Don’t do that!” ‘Sopranos’ creator David Chase on how his crew hated series finale set to “Don’t Stop Believin'”
Could Jason Sudeikis return to ‘SNL’ as the first host of the new season?