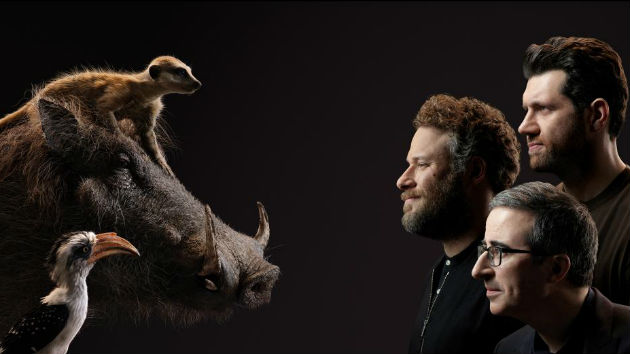 (NEW YORK) — When Billy Eichner was a struggling actor in 2002, bartending at the Broadway production of The Lion King, he never thought he’d be starring in the new CGI version of the Disney favorite — let alone singing on the same track as Beyoncé.

“Circle of Life!” he marveled, quoting one of the film’s classic songs. In the reboot of the 1994 classic, Eichner, best known for Billy on the Street, plays quick-witted meerkat Timon.  His BFF, Pumbaa the warthog, is played by Seth Rogen.

“I think Seth and I are now on the iTunes chart with Beyoncé on “Can You Feel the Love Tonight,” which is very exciting and bizarre,” Eichner said on ABC’s Good Morning America.”I’m sure she’s thrilled,” he joked. “Our styles compliment each other.”

“And the movie — I’ve seen it twice now — it is unlike anything anyone has ever seen,” Eichner added. “It’s so beautiful what [director] Jon Favreau [and] the designers have done. It’s insane.”

Influential filmmaker Melvin Van Peebles dies at 89
Democrats lash out at Biden administration over handling of Haitian migrants
Mom dying of ovarian cancer shares what she wants women to know about the deadly disease
First ‘SNL’ guests of the season: Owen Wilson, Kim Kardashian West, Rami Malek, and Jason Sudeikis
Jada Pinkett Smith celebrates 50th birthday on ‘Red Table Talk’; ABC to adapt Baratunde Thurston’s ‘How to Be Black’
“No one is safe. Not one of you.”: Johnny Depp decries ‘cancel culture’