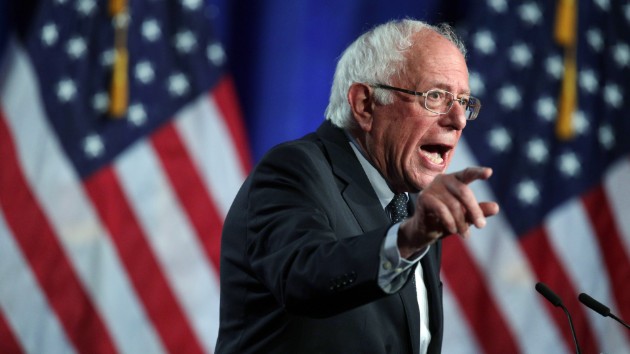 (WASHINGTON) — Bernie Sanders called on his fellow Democratic presidential candidates Wednesday to reject donations from health insurance and pharmaceutical industry executives during what was labeled as a “major address” in Washington, D.C., but an ABC News review of Federal Election Commission records earlier in the day found that Sanders himself accepted some of the same types of donations earlier in the campaign cycle. As part of Sanders’ “No Health Insurance and Pharma Money Pledge,” which his campaign previewed in a press release Wednesday morning ahead of the “Medicare for All” speech he delivered later in the day, the senator promised “to not take contributions from the health insurance or pharmaceutical industry.”The pledge specifically identifies “contributions over $200 from the PACs, lobbyists, or executives of health insurance or pharmaceutical companies,” excluding what it terms “rank-and-file workers employed by pharmaceutical giants and health insurance companies.” It additionally provides a list of “companies covered by the pledge,” which are members of the America’s Health Insurance Plans association and Pharmaceutical Research and Manufacturers of America group.In a review of Sanders’ publicly available campaign donation information, ABC News identified at least three contributions of more than $200 from two individual donors who could be considered executives at companies included on the list.One of the individuals who gave to the Sanders campaign is Lynn McRoy, who identifies herself on her LinkedIn page as vice president and global medical lead, breast cancer at Pfizer. She’s additionally identified as the breast cancer lead with U.S. Medical Affairs at Pfizer Oncology in an October 2018 press release. Pfizer is among numerous pharmaceutical companies on Sanders’ list.ABC News found at least four contributions from McRoy to Sanders thus far in 2019, including one of $500 and another of $250, which would be in violation of the pledge if McRoy is considered an “executive.”McRoy’s additional two donations, of $100 and $70, fall below the pledge’s $200 threshold, though were given within eight and three days, respectively, of her $250 contribution on March 28.Another donation of $1,000 came from Schiffon Wong, who identifies herself on LinkedIn as the executive director, global evidence and value development at EMD Serono, a company covered on Sanders’ list that describes itself as a “biopharmaceutical business of Merck KGaA, Darmstadt, Germany in the U.S.” Both EMD Serono and Merck are on Sanders’ list.In each instance, the job titles of the donors were provided in non-specific terms — as “medical director” and “researcher” for McRoy and Wong, respectively. Such descriptors are common in FEC reports and both individuals disclosed their employers, as is required.The Sanders campaign also received a contribution of $250 from Austin Kim, who is listed as the executive vice president, general counsel and secretary of Acadia Pharmaceuticals, a publicly traded company that produces a drug to treat Parkinson’s disease-related hallucinations. Acadia is not, however, listed on the pledge’s list as it is not a member of Pharmaceutical Research and Manufacturers of America.In response to ABC News’ inquiry about these contributions, the Sanders campaign said it will be returning them and any other donations that don’t meet the parameters of the pledge.”This pledge was launched today with our full knowledge that some money may need to be returned,” Sanders campaign spokesperson Sarah Ford told ABC News. “We’re glad to donate the three donations worth $2700 out of nearly $40 million received since launch.”The campaign’s acceptance of donations from executives in an industry renounced by its candidate is similar to a situation Sanders’ Senate colleague Cory Booker, D-N.J., found himself in earlier this month when he returned a donation from a pharmaceutical executive after it was uncovered by ABC News. Booker returned a $2,800 contribution to his campaign from the executive vice president and chief compliance officer at Eagle Pharmaceutical, which had been accepted despite the senator’s 2017 vow to no longer take money from pharmaceutical companies.Sen. Amy Klobuchar, D-Minn., another Democratic presidential candidate, who said in June during the party’s first primary that big pharmaceutical companies don’t “own” her, has also accepted nearly $30,000 from individuals affiliated with the industry this year, including more than $22,000 from executives and high-level officers of Minnesota-based pharma company Medtronic, FEC filings show. Klobuchar has not said she would return the pharmaceutical money she received.The move by Sanders to disavow such high-dollar industry donations comes amid a week in which health care has become a focal point of the Democratic presidential race. On Monday, former Vice President Joe Biden released a proposal to expand the Affordable Care Act and provide a public health care option, leading to criticism from Sanders, whose Medicare for All plan would completely replace the private insurance industry and place all Americans on a government-run program. Copyright © 2019, ABC Radio. All rights reserved.