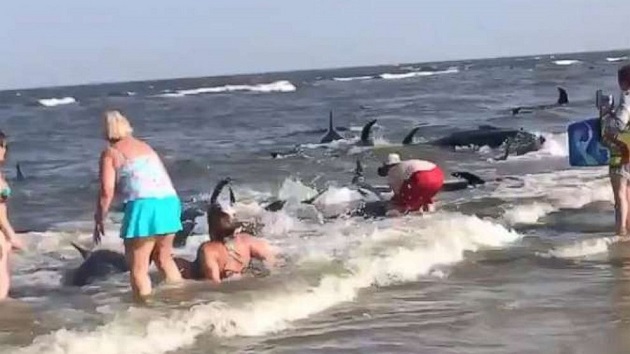 (NEW YORK) — Beachgoers in Georgia attempted to save the lives of more than 20 pilot whales that beached themselves along the coast, according to officials. The pod of whales began turning up on the beach on St. Simons Island Tuesday afternoon, prompting hundreds of volunteers to push them back out to sea, according to Glynn County EMA and Homeland Security.Several videos posted to social media show the volunteers surrounding the whales as they collectively heaved them from the sand to the water.At least two of the whales died, including one that was euthanized, but the rest were safely returned to the water, according to the Georgia Department of Natural Resources. They were last seen swimming in the St. Simons Sound, “and it is hoped they will continue to keep moving out to sea,” the statement read.It is unclear what caused the strandings, but they are a “natural occurrence,” Clay George, wildlife biologist with the GPNR, said in a press release.”The only thing we can do is to continue pushing them out to sea,” George said.Pilot whales are the most common species among cetaceans known to strand in mass numbers, according to the department.Pilot whales have a herd mentality and may have followed the leader toward the sand, experts told ABC Jacksonville affiliate WJXX-TV.Possible theories are that the leader could have been suffering from an injury or some sort of infection, or followed prey too close to the shore, WJXX reported.One witness told the station that it was “really exciting” to see all the volunteers trying to help them.The whales that died will be taken for necropsies.