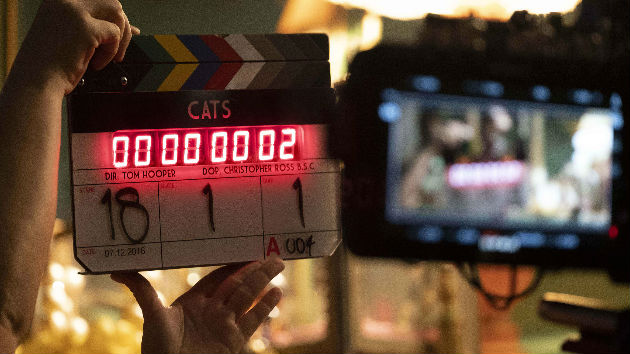 (LONDON) — Before we get the first trailer for CATS on Friday, a new behind-the-scenes glimpse of the making of the movie musical has been released.

The “Look Inside” features the movie’s stars — including Idris Elba, Rebel Wilson, Taylor Swift, Jennifer Hudson, James Corden, and more — discussing what being a part of the musical has meant to them, as we see scenes of them rehearsing on set.

“I was cast in 1981, just before we opened,” Judi Dench explains. “I snapped my Achilles tendon, and I thought that was my history with CATS. But it turns out not to be!”

Wilson says of the play, “I just remember loving it. So when CATS became a movie, obviously I jumped at the chance.”

Corden, a veteran of stage and screen, says, “I think it can really only be done by a director like Tom Hooper. He understands the spectacle of CATS.”

The filmmaker called CATS, based on the long-running Broadway musical, a “timeless story of inclusion and redemption.”

The clip also teases the film’s production design, use of state-of-the-art technology and combination of dance styles ranging from ballet to contemporary, hip-hop to jazz, street to tap. “It’s like directing a group of world class athletes,” Hooper adds.

“The scale of this thing is huge,” Elba says, and he means it literally: The sets are scaled to mimic how cats see the world.  “Three of four times bigger for the cat perspective,” he marvels. “This is a moment for you to step into a world that’s completely designed to entertain.”