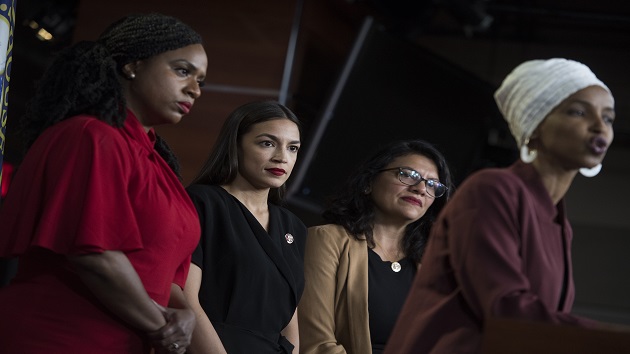 (NEW YORK) — The House of Representatives voted largely along party lines Tuesday to formally condemn President Donald Trump’s Twitter attacks against four Democratic congresswoman of color, with just four House Republicans and one independent lawmaker siding with Democrats to adopt the measure. The resolution rebuking Trump’s attacks against four House Democrats passed in a 240-187 vote on Tuesday evening after raucous debate on the House floor. Republicans argued House Speaker Nancy Pelosi’s criticisms of Trump’s comments ran afoul of House rules prohibiting lawmakers from saying the president made a “bigoted or racist” statement, prompting a parliamentary ruling and a series of procedural votes, including one allowing her to continue speaking on the floor. In a series of tweets over the weekend, Trump first criticized the progressive Democratic congresswomen for what he characterized as “horrible and disgusting actions,” telling them to stop criticizing the government and “go back” to where they came from. Three of the four Democrats targeted by Trump — Reps. Ayanna Pressley of Massachusetts, Alexandria Ocasio-Cortez of New York, and Rashida Tlaib of Michigan — were born in the United States. Rep. Ilhan Omar, a Muslim lawmaker representing Minnesota who Trump falsely accused of praising al-Qaeda, was born in Somalia. All four are U.S. citizens.The measure, introduced by Rep. Tom Malinowski, D-N.J., who was born in Poland, is titled “Condemning President Trump’s racist comments directed at Members of Congress.” It unfavorably compares Trump’s comments to those of Presidents Franklin Roosevelt, John Kennedy and Ronald Reagan, who praised the impact of immigrants on the United States, and “strongly condemns” Trump’s language, stating that it has “legitimized and increased fear and hatred of new Americans and people of color.” “This is an affront to 22 million naturalized citizens who were born in another country,” Rep. Jamie Raskin, D-Md., a cosponsor of the measure, said of Trump’s tweets on the floor Tuesday. “It’s an affront to the hundreds of millions of Americans who understand and love how American democracy works.”The targeted group of freshmen women, known as “the squad” on Capitol Hill, responded to the president’s attacks in a news conference on Monday afternoon, and urged Democrats and supporters to focus on their agenda. “This is a disruptive distraction from the issues of care, concern and consequence to the American people,” Pressley said.Omar and Tlaib both cited Trump’s comments as justification to launch impeachment proceedings against the president.Trump stood by his initial attacks on Monday and Tuesday.Roughly 42 Republicans in Congress criticized Trump’s attacks against their Democratic colleagues, according to an ABC News survey of 254 congressional Republicans, with a handful saying that they believed the comments were racist.”Political rhetoric has really gotten way, way over-heated all across the political spectrum,” Senate Majority Leader Mitch McConnell said on Tuesday. “From the president to the speaker, to the freshmen members of the house, all of us have a responsibility to elevate the public discourse. Our words do matter, we all know politics is a contact support. But it’s about time we lowered the temperature all across the board. All of us ought to contribute to a better level of discourse.” Pressed when he stopped short of calling the president’s attacks racist, McConnell said, “The president is not a racist. I think the tone of all of this is not good for the country.”In response, Ocasio-Cortez told ABC News that McConnell is “complicit in advancing racism in America” for not criticizing Trump.” “When you tell American citizens to go back to their country … that has everything to do with race,” she said.House Minority Leader Kevin McCarthy told reporters on Tuesday that he didn’t consider Trump’s comments to be racist, and accused Democrats of trying to play politics against Trump with the resolution on the floor. “Let’s not be false about what is happening here today,” he said. “This is all about politics and beliefs of ideologies.” House GOP leaders encouraged Republicans to vote against the measure. Only four — Reps. Susan Brooks of Indiana, Fred Upton of Michigan, Brian Fitzpatrick of Pennsylvania, and Will Hurd of Texas — voted with Democrats. Independent Rep. Justin Amash of Michigan, who recently left the Republican Party, also voted for the resolution. Others, including some Republicans who initially condemned Trump’s comments, opposed the measure, and accused Democrats of rushing to embarrass Trump with a vote on a partisan resolution. Trump’s attacks managed to unify House Democrats after weeks of infighting over the caucus response to the migrant crisis at the border, and the Trump administration’s immigration policies. “These are our sisters,” Pelosi said of the four Democrats targeted by Trump in a meeting Tuesday morning, according to an aide in the room. “The fact is, as offended as we are, and we are offended by what he said about our sisters. He says that about people every day and they feel as hurt as we do about somebody in our family having this offence against them,” she said. “This is, I hope, one where we will get Republican support. If they can’t support condemning the words of the President, well that’s a message in and of itself,” she added.