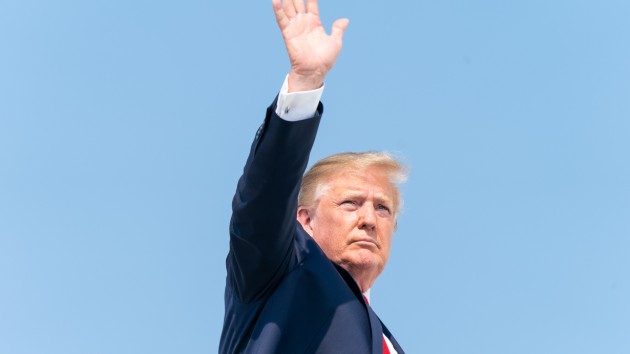 (WASHINGTON) — President Donald Trump continued his now days-long attacks on four congresswomen at his Greenville, North Carolina, rally on Wednesday night, eliciting the raucous crowd of supporters into “send her back” chants.Just the mere mention of Reps. Alexandria Ocasio-Cortez, D-N.Y., Ilhan Omar, D-Minn., Rashida Tlaib, D-Mich., and Ayanna Pressley, D-Mass, the thousands of supporters gathered at the president’s campaign rally launched into prolong boos.The president, just days after making tweets calling on the four congresswomen known as “the squad” to leave the country, slammed Rep. Omar for past comments she made regarding the terror attacks on September 11 and accused the representative of having a “history of launching vicious anti-Semitic” comments.”Send them back,” rallygoers erupted.The president also reiterated his attacks from over the weekend where he told the four congresswomen to go back to their home countries.”I said I have a suggestion for the hate-filled extremists who are constantly trying to tear our country down, they never have anything good to say, that’s why I say, hey, if they don’t like it let him leave. Leave, let him leave,” the president said.This is the first time Trump addressed supporters after his weekend Twitter attack on progressive Democratic congresswomen for, as he described it, their “horrible and disgusting actions.” The president said they should stop criticizing the government and “go back” to where they came from.The rally on Wednesday night, originally scheduled on the same date of special counsel Robert Mueller’s congressional testimony, now comes a day after the House of Representatives voted to formally condemn the president’s attacks as many Democratic lawmakers continue calls for impeachment. Mueller’s testimony was pushed back to July 24.”The President pointed out that many Democrats say terrible things about this country, which in reality is the greatest nation on Earth, while defending countries and regimes that can’t hold a candle to our values and successes,” Tim Murtaugh, the Trump campaign’s communications director told ABC News in a statement.Ahead of the rally, Trump campaign aides jumped to the defense of the president, accusing Democratic lawmakers of being socialists. But the campaign stop will also serve as a gauge on whether there’s a political price to pay within the president’s base.”President Trump loves this country and takes issue with elected officials who constantly disparage it and spew horrible anti-Semitic rhetoric at the same time. All Democrats have now leapt to the defense of the ‘Blame America First’ crowd when they really should be defending America and rooting out anti-Semitism in their ranks,” Murtaugh continued in a statement.The president has a pattern of making similarly inflammatory comments, including his remark about “very fine people on both sides” in Charlottesville — where a woman was killed during protests — or calling some Mexicans “rapists” the launch of his campaign in 2015.Still, the president’s base appears to remain supportive.According to the latest ABC News/Washington Post poll, among current Trump supporters — those who back him against all Democrats — 52% call it extremely important to them that he wins a second term. In another measure, 48% of adults said there’s no chance they’d consider Trump against any Democratic candidate. It’s 46% among currently registered voters.Trump narrowly won North Carolina in 2016.This is the 26th rally he’s held in North Carolina since he first launched his presidential campaign in June 2015.Copyright © 2019, ABC Radio. All rights reserved.

Biden challenges UN to act together on pandemic, climate change
Line 3 pipeline resistance continues as activists ask Biden admin to shutdown project
Britney Spears makes triumphant return to Instagram, but some fans think someone else is running the account
Biden to focus on ‘intensive diplomacy’ at UN amid tensions with allies
Republicans dig in on debt-limit standoff despite Democratic effort to mount pressure
‘Dancing with the Stars’ season 30 recap: JoJo Siwa’s historic first performance puts her atop leaderboard