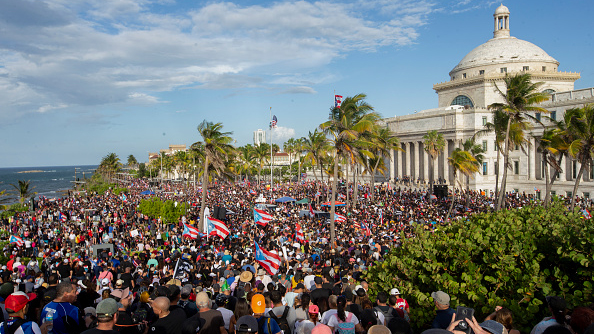 (SAN JUAN, Puerto Rico) — Residents, officials and authorities in San Juan were gearing up Wednesday for what was being touted as large demonstrations in the Puerto Rican capital, as protesters went back to the streets to continue demanding the resignation of embattled Gov. Ricardo Rosello.San Juan Mayor Carmen Yulin Cruz told ABC News in a call on Tuesday night that she expected Wednesday’s planned protest to be the largest they have seen yet — with 20,000 people marching from the Capitol building to the governor’s mansion. She credited the involvement of musical artists who had called for protests. On Saturday, the nonprofit journalism group Center of Investigative Journalism published nearly 900 pages of conversations from a leaked group chat between Rosello and several top aides that detail efforts to manipulate public narratives, operations to discredit negative press coverage and criticism of opposition leaders.The conversations, made through the Telegram app, also contain sexist, homophobic and misogynistic comments from the members of the group, according to the report. These messages have not been independently authenticated by ABC News. After the revelation of the messages, Rossello announced the resignation of a number of government officials including Luis Rivera Marin, the secretary of state. “I have not committed any illegal acts, or corrupt acts. I committed an improper act,” Rossello said of the Telegram chat group messages.But by Monday, the Old San Juan streets surrounding the governor’s mansion were filled with hundreds of protesters calling for Rossello to leave. Clashes left nearly two dozen police officers injured.On Tuesday, Rossello apologized for his involvement in the messaging but insisted that he would not resign his post.”I’m not proud of what I did. Those were merely comments but they were hurtful comments. And I apologize for what I’ve done. But, I need to move forward, continue on with the work I’m doing for Puerto Rico,” he said. He said he understood that Monday night’s protests were a direct message against him and his administration.”I will continue in my job,” a defiant Rossello said from the governor’s mansion, adding “my commitment is to keep on working.”On Wednesday, Royal Caribbean said that a second cruise ship — this time, the Harmony of the Seas — would not be stopping in San Juan because of concerns about the demonstrations.”Due to the ongoing civil unrest in San Juan, Puerto Rico, we have cancelled Harmony of the Seas’ call to San Juan. Harmony will now sail to St. Maarten, her next scheduled port of call. Concern for the safety and wellbeing of our guests and crew members is our top priority,” the company said.The previous day, Royal Caribbean said it that had canceled a planned stop to the city by its Empress of the Seas and would be rerouting to Tortola.”Our guests will receive refunds for prepaid shore excursions. We continue to monitor the situation closely and will make adjustments as necessary,” the company said in part.In response to the news that the Empress of the Seas would not be docking in San Juan, Cruz told ABC News Tuesday night that there are times where one has to “forego a little today to ensure a lot tomorrow.” White House deputy press secretary Judd Deere said in a written statement on Tuesday that the latest political developments on the island “prove the President’s concerns about mismanagement, politicization, and corruption have been valid.”The governor responded to the White House’s comments, saying “Corruption is a social evil. It’s a social evil in the private sector, it’s a social evil in local government, it’s a social evil in the federal government.”

Those suffering from sickle cell disease may finally be getting some relief as experts work on cure
America Strong: Teachers across the country go above and beyond as in-person classes return
Could Jason Sudeikis return to ‘SNL’ as the first host of the new season?
Ice Cube mourns the loss of ‘Friday’ co-star Anthony Johnson; BET sets return date for ‘Twenties’
Search continues for missing 6-year-old Isabella Kalua
2 being treated for gunshot wounds following shooting at Heritage High School in Virginia: Police