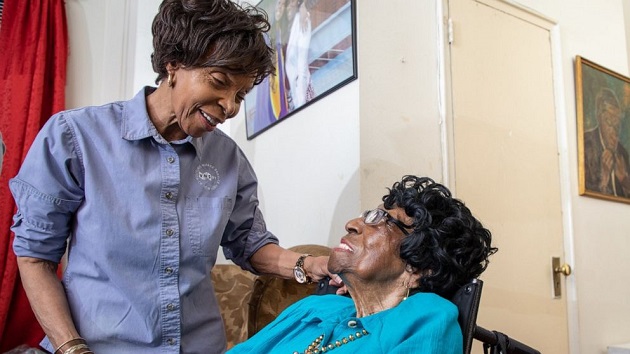 (NEW YORK) — Alelia Murphy just made history.On July 6, while wearing a long, elegant yellow dress, white gloves and a tiara, she celebrated her 114th birthday, becoming the oldest living person in the United States.Her historic accomplishment was celebrated alongside her family and friends and was verified by the Gerontology Research Group, a database that records the oldest humans in the world. Murphy had a simple piece of advice when asked the secret to living a long life.”Treat people right,” she said.Her family said that, most of all, Murphy has loved spending time with them and valuing God, something her daughter attributes to her longevity.”She always said God comes first,” Murphy’s 71-year-old daughter, Rose Green, said. “And I found that to be true.”Murphy’s party was held at the Harlem State Office Building in New York, guests told ABC News. Guests said it was evident Murphy enjoyed the moment.”She looked relaxed,” Shana Harmongoff, an event planner for the party, said. “She didn’t say much, but she was smiling.”Green said her mother has not lost her sense of humor.”If you’re around her, you’re laughing all the time,” Green said. “I’ll be telling her, ‘Mom, it’s time to take the medication.’ And she’ll tell the aides, ‘You take the medication, you take the medication."”Murphy was born on July 6, 1905, in North Carolina. This was just a few years before the first Model T automobile was introduced by Henry Ford, and just a couple years after the first silent movie was released. Green said her mom, who grew up living in the pre-civil rights era, had to drink from separate water fountains than her white peers and enter stores and restaurants through back doors.”She always taught me to keep going, whatever happens,” Green said.Murphy held several jobs, from working in a hat factory to becoming a top seller of cosmetic products.Murphy’s visiting nurse, Natalia Mhlambiso, who works for the Visiting Nurse Service of New York, comes to Murphy’s home in Harlem, where she lives with her granddaughter. Mhlambiso said processed food was not around when Murphy grew up in North Carolina, and that she continues to eat healthy to this day and never ventured into alcohol or drugs.”She is where she is now because of what she did when she was young,” Mhlambiso said.Murphy maintains healthy blood pressure and has not experienced any heart problems — an incredible feat for someone her age.Those close to Murphy said she’s still enjoying life.”She is always smiling when I come in,” Mhlambiso said. “She is still looking forward to go out.” Still, she always speaks her mind.”She will tell you when she has pain,” Mhlambiso said. “[And] what makes her comfortable.”Murphy is only two years younger than the oldest man alive, Kane Tanaka, 116, who resides in Japan. She currently is the eighth-oldest person in the world, according to the Gerontology Research Group’s ranking.But many did not think a celebration at this age was possible.”It’s just a history unheard of,” Mhlambiso said.There may even be a more extravagant party for Murphy’s 115th birthday.Copyright © 2019, ABC Radio. All rights reserved.