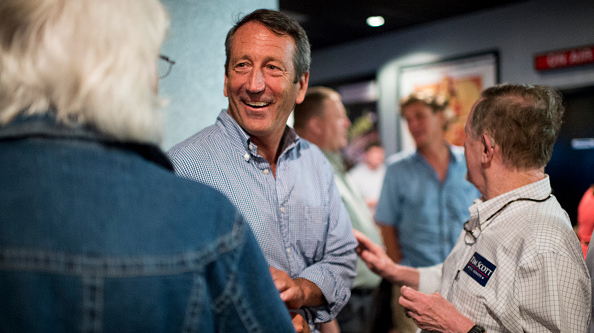 (WASHINGTON) — Former South Carolina Rep. Mark Sanford made waves this week after saying he’s considering launching a primary challenge against President Donald Trump, but the Republican added Wednesday that beating the president wouldn’t necessary be the main objective of his potential run.”I don’t think that winning necessarily has to be a goal in this kind of thing,” he told ABC News political director Rick Klein and ABC News senior congressional correspondent Mary Bruce on the “Powerhouse Politics” podcast Wednesday.”The question is: Can you win in bringing this debate forward,” Sanford added. “There are ways of winning but not winning in the electoral sense. I think it would be a win if you change the debate [so] we begin to have a real serious conversation on the Republican and Democratic sides of the aisle as to what we do to avoid a financial upheaval.”Sanford, who also previously served as South Carolina’s governor, said Wednesday that if he runs — a decision he plans to make over the next 30 days — the national debt and economy will be the main focus of his Republican primary challenge against the president.Yet, the former governor admits that argument won’t be the easiest one to make against a president presiding over a economy that includes record low unemployment numbers.”I mean, that’s why people aren’t talking about it,” Sanford said regarding the economy. “They’re talking about his different character flaws, what they don’t like about what he says, the way he is inflammatory and divisive — go down the list.”Sanford left Congress in 2018 after losing his primary following the president endorsing his opponent, state Sen. Katie Arrington, who would go on to lose in the general election to Rep. Joe Cunningham.In regards to the president’s recent racist tweets targeting four congresswomen of color, Sanford said he wasn’t surprised by Republicans’ muted response.”This is the political reality, that, you know, unless [Republicans] want to get fried by the president or have him come after them in some form or fashion they’re going to keep quiet,” he said.However, Sanford would not say how he would have voted on Tuesday’s historic House resolution condemning the president’s “racist comments,” which passed in a 240-187 vote. He said he hasn’t looked at it.”I’m not in any way dismissing the racially charged inflammatory language the president uses — but all of us are again falling into the orbit of Donald Trump. Too much of what he talks about and does simply ensures that he’ll be the center of the debate,” he said.While Sanford said he will take the next month to decide on whether or not he’ll run, the prospects of his past controversies surrounding an extra-marital affair in 2009 being brought up during the campaign is already weighing on his decision.”Am I an imperfect messenger? Absolutely. Is that part of the reason that I’ve held up — as friends have suggested I do this — for the last year? I don’t want to get hit on that stuff,” Sanford said. “I don’t want to reopen old scabs but I got to look my poor sons in the eye.”But the former congressman said if he runs, he wouldn’t be surprised if President Trump brings up those controversies. “There’s nothing on- or off-limits in the world of politics,” he said.If Sanford were to get into the race, he wouldn’t be the only Republican running to unseat President Trump. Fellow Republican former Gov. Bill Weld has been running since earlier this year, but has yet to catch fire in a substantial way, raising just under $700K in the second quarter for his long-shot campaign.And like Sanford, Weld, a libertarian who ran in 2016 on on a third party ticket with Gary Johnson, has made the debt and spending a key issue on the campaign trail.”They’re not serious about cutting spending or cutting the deficit. I don’t think this president is an economic conservative at all,” Weld said in a recent interview.Besides Weld, other top Republicans long-rumored for primary bids against the president, including former Gov. John Kasich and Maryland Gov. Larry Hogan, have signaled they are not eager to challenge the president, who remains popular within the party.Hogan, a vocal critic of the president, announced in June that he would “not be a candidate” in 2020 and would remain governor of Maryland.Powerhouse Politics podcast is a weekly program that posts every Wednesday, and includes headliner interviews and in-depth looks at the people and events shaping U.S. politics. Powerhouse Politics podcast is hosted by ABC News Chief White House Correspondent Jonathan Karl and ABC News Political Director Rick Klein.

The FDA panel decision on vaccine boosters shows the process worked: Fauci
SEC admits error in Penn State-Auburn game
A family promise led her to Mount Cristo Rey, the site of a pilgrimage for those seeking a miracle
How LA County countered recall-election disinformation in real time on social media
Latinos in sports are drawing on their heritage to inspire others
Run or Walk for Someone Special this Sunday