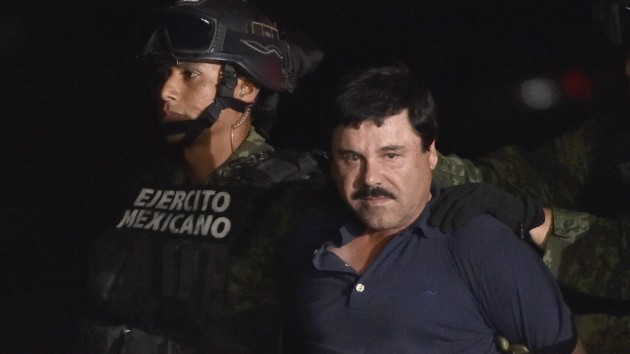 (NEW YORK) — Joaquin “El Chapo” Guzman is set to be sentenced to life in prison on Wednesday, after he was convicted of running a murderous Mexico-based drug cartel that flooded the U.S. with cocaine, heroin, methamphetamine and marijuana. Guzman, 62, was convicted in February of charges that mandate life in prison, proving he was “a ruthless and bloodthirsty leader of the Sinaloa Cartel,” federal prosecutors in Brooklyn, New York said in a court filing.”The horrific nature and circumstances of the defendant’s offense, his history and characteristics and the fact that the defendant committed some of the most serious crimes under federal law make a life sentence warranted,” prosecutors wrote. The U.S. had agreed not to seek the death penalty as part of its deal with Mexico to transfer Guzman into American custody.The defense declined to submit a sentencing memorandum, since there’s no doubt about the outcome.”When there’s a guaranteed no chance of anything but life, there was no point in a sentencing memo,” defense attorney Jeffrey Lichtman told ABC News. “It’s mandatory, and there’s no discretion with the judge.”Defense attorneys will however lay the groundwork for an appeal based, in part, on the account of an anonymous juror to VICE about jurors violating the judge’s instructions not to consume media accounts of the trial.”We’re livid over the fact that up to five jurors were committing crimes while they were judging Guzman, and the judge doesn’t even think it’s worth a hearing,” Lichtman said. “It’s sort of a revolting result. Like what’s the point of even having a jury.”The sentencing hearing before Judge Brian Cogan is expected to include an appearance by Guzman’s wife, Emma Coronel Aispuro.The trial has spanned four months. In 10 weeks of testimony, 53 prosecution witnesses described a naked journey through a secret tunnel, plastic bananas filled with cocaine and spied-on mistresses.The government presented evidence that Guzman ordered the murder of or, in some instances personally tortured and murdered, 26 individuals and groups of individuals. His army of assassins carried out violence on his orders, prosecutors said.Testimony also showed that from the 1980s until his arrest, Guzman was an innovator in drug trafficking, devising new methods to evade law enforcement from detecting the multi-ton quantities of cocaine he brought from South America to the U.S.”He was a killer. He was a murderer. He was a manipulator. But he was also very, very, very smart, very street smart,” Ray Donovan, special agent in charge of the New York field office of the Drug Enforcement Administration, told ABC News after Guzman’s conviction. “He was he was willing to use extreme violence to control his territory and control his organization.”Copyright © 2019, ABC Radio. All rights reserved.

What is Title 42? Amid backlash, Biden administration defends use of Trump-era order to expel migrants
Trump return to White House ‘would be a disaster’ for US intelligence: Former DHS whistleblower
Pfizer CEO says it’s possible to distribute both boosters and primary doses
The push for electric vehicles may be killing sedans for good: Experts
Iowa Republican Sen. Chuck Grassley, 88, running for reelection
Harris interview with ‘The View’ delayed after co-hosts test positive for COVID-19